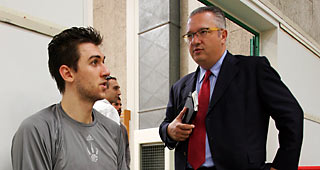 Rebuilding seasons are never pleasant and the Raptors are clearly experiencing their first since this season with the departure of Chris Bosh.

Moreover, injuries made matters more difficult. Linas Kleiza was recently lost for the season and they also have been without Ed Davis, Reggie Evans and Leandro Barbosa for extended stretches.

RealGM sat down with Gherardini to talk about his vision for the Raptors, injured Kleiza’s situation and how the team scouts talent.

RealGM: What is the situation with Kleiza?

Gherardini: He underwent surgery and was operated on by one of the top doctors in the world (Dr. J. Richard Steadman). Nobody was expecting how delicate the situation was. The surgery was very successful. Like I said, his doctor is number one in the world and we have to be confident with what happened. Now we’ll see how rehabilitation process will go.

RealGM: Do you expect Kleiza to play next season?

Gherardini: The prognoses are that it takes a very long time. Linas is still young and we made a long-term commitment. Players’ health is the most important thing. Linas is too young to not do the right things. We will just be witnessing things happening. We hope that he will be ready before the season, but right now it’s too early to say.

RealGM: How about EuroBasket and letting Linas play there? Usually NBA teams are careful about letting their players compete in international competitions.

Gherardini: We always do a favor for people who want to participate with their own teams, in the past. It’s the nature of our success in the community of Toronto. But the thing, which comes first, is always players’ health. If a player is not ready to play physically, there’s no sense (in doing so). All of our players play for their national teams and we are happy that they play. You can see the good relationship that we have with Lithuanian basketball federation. It’s a pleasure and honor to be here, but if the player can’t play, he can’t play. It’s very simple.

RealGM: How could evaluate Kleiza’s game during his time with the club?

Gherardini: We like him a lot. That’s the reason why we signed a long-term contract with him. He came back from Europe to start the season probably not in 100 percent shape. He was tired after the long summer. Actually it was a young team, which was just forming. Let's say he was inconsistent, there were a lot of up and downs, but he was suppose to play a major role. He can play inside and outside, but he has never been 100 percent healthy since came to Toronto.

RealGM: In your opinion, what kind of role will Kleiza have when he will comes back? Do you see him as a role player or do you think he could be a starter one day?

Gherardini: You don’t give long-term deals to players, who get minor roles. For us, it didn't matter if he started or not, he was important to give us outside shooting. He’s also one of the most athletic players on the team and he the talent that has made him special through his career. He knows how to score and he scores in different ways. I’m also working for the Canadian national team and we played against Lithuania in the Worlds in Turkey. I’ve seen Linas since he was very young; I’ve seen him playing in college for Missouri. I know what he can do.

RealGM: What is your vision for the Raptors?

Gherardini: It is a rebuilding year for us. During our rebuilding year, we have had a lot of injuries, whatever it is Linas Kleiza or Reggie Evans, who was the leading rebounder in the league, or Leandro Barbosa. It’s not easy to rebuild with only young players. I think we have some young quality players, who can grow, and we have some resources, which we can use before the trade deadline. We have exceptions, first round picks and expiring contracts, which can be worth something. We have money and some flexibility. Even today with many players missing, we’re very close to playing everybody (in each game). We just don’t have enough players.

RealGM: Are you excited to be a part of the history as the Raptors will soon play regular season games in Europe?

Gherardini: We’re very excited. Our goal is to win at least one of the two (laughing). We’re happy to be a part of the history, but for us it’s a real game. We really want to try to win because that counts. We’re very excited to make history, but if you make history by losing both games, it’s not good. We have a lot of European players so it would be nice to win the games. It’s something good for growing the game of basketball. In general, I don’t think that it’s something we could do all the time in an 82 game schedule. But it’s good for the fans and for the game and to promote the game.

RealGM: There’s a lot of speculation about having a permanent NBA team in Europe. What is your opinion about that?

Gherardini: I’m not the right person to talk about it. I think whatever the NBA is doing today, it’s important for the grow of the game. And there’s no doubt that basketball is becoming the most popular global sport.

RealGM: Do you still think that Andrea Bargnani can be a franchise player?

Gherardini: Andrea is improving every year. Sometimes we forget that he’s only 25-years-old. Big men always develop slowly. He can be a great scorer. He can easily score 20 or 25 points per game and there’s no doubt about that. I think he needs to improve some other areas and then he could become what we’re expecting.

RealGM: As an NBA scout, how do you go about evaluating a player? Watching one game is not always a good indication as the player might be having an off day or be nervous because of your presence?

RealGM: How do you make the final decision as to whether the player is the correct choice for your team?

Gherardini: I think we have a nice little structure. Everything starts from general manager Bryan Colangelo. It’s a group of us and all of us are going in the same direction. All of us are collecting information and going to see college games or European games. At the end, we all share information and discuss. You want to be ready for that day in June when your team will choose your future. That’s how it works.

RealGM: When you enter an arena as a high ranking NBA executive, are you aware that much of the focus is on you? How do you deal with that and try to maintain a discreet presence?

Gherardini: That’s why you sometimes try to stay away from being seen. Now it’s a such a “under the lights” process. We were in Spanish cup and other countries and you always try to find a section where the scouts sit. Plus, players in Europe already developed an approach because most of them already have agents and already have gone from one team to another. Most of them already know things that the high school or college players have to go though.