Will Current Regime Get To Finish What They Started? 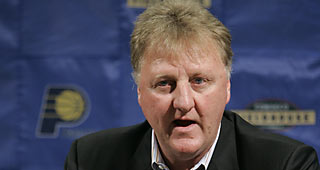 For the better part of the last seven years, the Indiana Pacers have either gone backward or stood in place.

I don’t mean to awaken old demons, but it all started in November of 2004 when Ron Artest went against his better judgment and went after a fan in the stands at the Palace of Auburn Hills.

Since then, the Pacers have had three coaches, traded Artest, Stephen Jackson, Al Harrington and Jermaine O’Neal and watched Reggie Miller retire. They have remade their roster almost entirely with Danny Granger and Jeff Foster (a soon-to-be free agent) the only carryovers from their 2005-06 roster.

Thanks to the disciple and patience of president Larry Bird and general manager David Morway, the Pacers enter an uncertain summer with more than $30 million in projected cap space, which could be used to fortify a team that gave the Chicago Bulls, owners of the NBA’s best regular-season record, five difficult games in the first round of the playoffs.

The question remains -- will Bird and Morway finish the job they started?

As recently as four months ago there were doubts as to whether Bird would remain as president, but the team’s success under interim coach Frank Vogel and their first postseason appearance since 2006 re-energized him.

Bird says the decision essentially belongs to owner Herb Simon. In turn, Simon has said that he wants Bird to remain with the franchise.

Here’s the catch: Bird wants assurances from Simon that he’s willing to spend money this summer. An abundant amount of cap space is great, but the ability to spend it is another beast.

Who the Pacers may or may not target (the front office already has a checklist) is a debate for another time. Right now, it’s important that the team’s vision remains the same.

No matter what a new president or general manager tells the media, the core built by Bird and Morway won’t be safe under a new regime. Who knows what might become of the team under different guidance, but after a few years of being one of the league’s favorite punching bags The Powers That Be deserve a shot to make the Pacers into a contender once again.

While the focus this offseason will be free agency, the Pacers will have another decent draft pick as the owner of the worst regular season record among this spring’s playoff entrants.

Since Morway was promoted to GM in May of 2009, the Pacers have drafted very well. They added Tyler Hansbrough (13th in 2009) and Paul George (10th in 2010) in the first round and both were starters in their five-game series against Chicago.

Hansbrough, who was initially thought of as a solid rotation player, has shown flashes of becoming a long-term starter and George grew up in front of the nation last month while guarding Derrick Rose effectively.

Perhaps more impressively, Indiana added a solid backup point guard in A.J. Price with the 52nd pick in 2009. The organization is also incredibly high on Lance Stephenson, the 40th selection last June, who hasn’t gotten a chance to show his talents yet.

Prior to that, Bird made decisions alongside Donnie Walsh, who enjoyed a great run from the late 1980s to the mid 1990s, but missed a few times this decade. Shawne Williams (17th, 2006) was as big of a disappointment as Granger (the same pick in 2005) has been a tremendous find.

Since 2005, the Pacers have completed nine trades involving 30 players, but they haven’t swung a deal since acquiring Darren Collison and James Posey from the Hornets in a multi-team trade last August.

Bird and Morway have done a great job of not hitting the panic button in recent years as the playoffs came and went four times without the Pacers receiving an invitation.

However, their patience hasn’t been completely beneficial. The decision to fire Jim O’Brien certainly came late. It doesn’t matter in the grand scheme of things, but the team would have notched a few more wins had Vogel been installed as coach a bit sooner.

Indiana’s identity as a high-octane offense that plays feisty defense was due in part to Vogel, but also the construction of the roster itself. Bird and Morway can continue to add players to fit that style this summer without blinking an eye. A new executive will look to make his own stamp on the roster.

In doing so, there’s also a good chance the new regime would take the credit Bird and Morway deserve should the team continue to improve.

The players clearly support Vogel and even with Bird/Morway he isn’t guaranteed to earn the full-time job. You have to believe that his chances of getting the job will decrease if his current bosses don’t re-sign.

When it comes to the success of the Pacers over the next decade, the retention of Bird and Morway is paramount, but Vogel is important over the short-term as well.

As a first-time head coach, Vogel more than held his own against some of the league’s best coaches. The statistics were all impressive as the team improved almost across the board from O’Brien to Vogel, but his ability to motivate is unquestioned.

The Pacers shouldn’t have had a chance against the Bulls, but they were in four of the five games and deserved to come away with more than just one victory. Rather than playing tentative, as they did under O’Brien, they played with confidence and passion.

Vogel is the perfect coach for the Pacers right now as they march towards what they hope will be title contention. He’s ideal for a young, improving team like this one. It may not be fair to him, but for lack of a better analogy he’s an ideal “starter” coach.

If they become a 50-win team annually, then it might be time to call in a veteran coach.

Adrian Wojnarowski of Yahoo! Sports reported that the Pacers reached out to the Spurs for permission to speak with assistant general manager Dennis Lindsey about a prominent role.

Out of respect for both Bird and Morway, the Spurs and Lindsey passed on the opportunity to open up talks as long as the president and general manager maintain their current positions.

The perception of some is that Morway’s job is in greater jeopardy than Bird’s, but I maintain the belief that the GM will remain if the president does. Even before Indiana’s core started showing signs of a promising future, Morway was mentioned in reports as a possibility for other jobs. ESPN.com’s Chad Ford reported last summer that Morway was a possible candidate for the same position with the Suns.

My prediction/suggestion is that Simon give Bird the green light to spend this summer; assuming a lockout doesn’t postpone plans to finally cash in on their cap space.

Bird then would decide to return as team president while helping put together a new contract for Morway, who might have increased responsibility, which is something that has been floated as a possible stipulation should Bird re-sign.

The pair will then immediately begin a round of coaching interviews with Vogel rightfully getting one of the first meetings. After soliciting opinions from players like Granger, Bird and Morway decide to sign Vogel to a guaranteed two-year contract with team options for additional years.

Simon would be wise to realize that more changes, especially one involving Indiana’s beloved Bird, isn’t going to help their league-low attendance either.

Vogel is a cheap coaching option for a cash-strapped franchise and while Bird certainly desires the ability to spend the money the team has worked very hard to free up, Simon can rest assured that moves won’t be made simply for the sake of doing so.

The current regime will be able to keep the train on the same track with a solid plan heading into what will be a very important offseason for both the Pacers and the entire NBA.