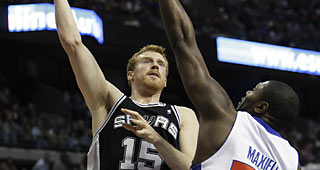 Over the past three seasons, the San Antonio Spurs have had the look of an elite team by averaging 55 wins. However, in that same span, they’ve lost in the first round twice and been swept out of the second round.

Part of that transition was unavoidable, as players age, their defensive ability tends to go first. Defense is more a function of athleticism than offense, where a great player’s skill-set will allow him to remain dangerous even as he loses a step. After over 1,200 combined regular season and playoff games, Tim Duncan, a seven-time first-team All-Defense player, is no longer on the level of a Tyson Chandler or a Dwight Howard when it comes to protecting the rim.

But as Duncan, Manu Ginobili and Tony Parker have aged, the Spurs have surrounded them with players who would maximize their offensive abilities rather than help them defensively. Effectively, while their competitors got bigger up front, the Spurs got smaller. It was a strange decision for a team that dominated most of the decade playing two seven-footers, and if they want to return to title contention, they will need to improve their front-court.

After trading for Pau Gasol in 2008, the Lakers went to three straight NBA Finals, with a super-sized front-court featuring three 6’10+ players. Dallas is the only Western Conference team that’s beaten them in the playoffs since, and they play two athletic seven-footers (Chandler and Brendan Haywood) at center as well a second seven-footer (Dirk) at the power forward position.

In contrast to their rivals, San Antonio has emphasized floor spacing from the power forward position, resulting in much smaller players at the position. Since Robert Horry’s retirement, the Spurs have used primarily three big men next to Duncan: Matt Bonner, a 6’10 jump-shooter, Antonio McDyess, a 6’9 jump-shooter in his late 30’s, and DeJuan Blair, a 6’7 center.

When he was in his prime, Duncan could have overcome the athletic deficiencies of his front-court partners. But he’s no longer capable of defeating an elite frontline by himself.

In 2009, San Antonio had to overload their defense to help Bonner defend Nowitzki, and they lost to the Mavericks 4-1 in the first round. In 2010, they had no one on their roster who could match up with Amar'e Stoudemire, and the Suns swept them out of the second round.
Last year, the Grizzlies, with the potent frontcourt duo of Marc Gasol and Zach Randolph, overwhelmed the Spurs on the low block and became only the second #8 seed to beat a #1 in a best-of-seven series.

The Spurs have been one of the most consistently well-run franchises over the last decade, and their front office is widely seen as a model for the rest of the league. Yet, more than anything else, it was their front-office that failed them over the last three years: despite their gaudy regular-season win totals, San Antonio has had essentially no shot at winning a championship with such a weak front-line.

Tiago Splitter, a 6’11 240 Brazilian drafted by San Antonio in 2007, was supposed to be the answer. But the 2010 Spanish League MVP struggled mightily with the transition to the NBA: he wasn’t athletic enough to be a difference-maker defensively and his poor mid-range jumper killed the Spurs’ floor spacing on offense. As a result, he never really cracked their rotation.

Of course, acquiring an athletic interior player with the skill level to fit into the Spurs offense is easier said than done. They are one of the most valued commodities in the NBA, and it’s extremely hard to find one who doesn’t have a significant amount of red flags without drafting at the top of the lottery. Oklahoma City’s Serge Ibaka would be a perfect fit in San Antonio, but the Thunder wouldn’t trade him for any one of the Spurs’ Big Three.

San Antonio needs an athletic 6’9+ big man who can match up with guys like Zach Randolph, Nowitzki and Pau Gasol and block shots at the rim while still being able to step out and hit a 15-20 foot jumper. Without one, nothing else really matters, and when they run into the Lakers or the Mavericks phalanx of seven-footers in the playoffs, they will lose.

They are in a similar position as Dallas was last year: an aging offensive-minded team who needs to upgrade their interior defense. The Mavericks got lucky when the Charlotte Bobcats decided to trade the injury-plagued Tyson Chandler to save salary; the Spurs will need to pull a similar type of rabbit out of their hat if they want to rejoin Dallas amongst the NBA’s elite.

One intriguing possibility is Tyrus Thomas, another member of the Bobcats who is likely available in the wake of the franchise’s decision to rebuild from the ground up. A 6’9 215 power forward with a 7’4 wingspan and a 34’ vertical, his jaw-dropping athleticism was the main reason why he was taken fourth overall in the 2006 draft. He’s still only 25 and his free-throw shooting percentage, a fairly reliable indicator of jump-shooting ability, has steadily increased since he’s entered the league.

Thomas, who has been plagued by whispers of off-the-court problems, doesn’t fit the culture of professionalism the Spurs have become known for. However, after not winning a second-round playoff game in four years, San Antonio has to ask themselves how much that culture is still worth.

- This is the latest in a ‘Missing Pieces’ series of articles from Jonathan Tjarks. Click on the following links to read his examinations of the Lakers and Thunder.