Pacers Slightly Different Than They Appear On Surface 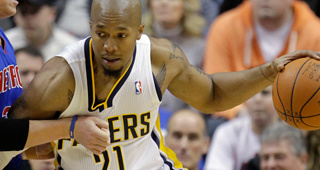 If you take a look at the standings, the Indiana Pacers are 4-2 and one game behind the Chicago Bulls in the loss column for first place in the Central Division. They are undefeated at home (2-0), .500 on the road (2-2) and they haven’t lost back-to-back games.

If you look a bit a deeper, however, the picture isn’t quite as rosy.

Five of Indiana’s first six games were against teams that failed to quality for the playoffs last season and while they have gone 4-1 in those games, they needed overtime to beat the Cleveland Cavaliers and lost to a Detroit Pistons team that has won just two times in six tries.

They could have ended this argument with a good performance against the Miami Heat on Wednesday night, but they suffered a 35-point loss despite the fact that Dwyane Wade didn't play because of a left foot injury.

It could very well be that Frank Vogel is still trying to work in David West, but the Pacers have been a poor offensive team through six games.

They are shooting just 40.2% from the field, better than only the Sacramento Kings, Washington Wizards and New Jersey Nets. Oddly enough, but understandable given the relatively small sample size, Indiana is shooting better (40.6%) from behind the three-point line than they are overall.

On Jan. 2 against the Nets -- their most impressive offensive effort of the season -- they shared the basketball and shot 52.6% from the floor, assisting on 26 of their 41 made field goals.

Vogel is undoubtedly preaching offensive movement as they have been stagnant at times. The Pacers average 18.3 assists per game (23rd in the league) on 32.5 made field goals. They are assisting on just 56.3% of their baskets. The league-leading Boston Celtics record an assist on 66.9% of their made field goals. The ball movement and unselfishness must improve.

They rank in the bottom third of the NBA in offensive rating at just 99.3 points per 100 possessions (23rd), but have been saved by their defense. They have a rating of 100.2 (10th) and opponents are shooting just 42.8% against them.

Danny Granger, who is hitting just 31.7% of his shots this season, has delivered more than once in the clutch already, but his shot selection has been poor more often than not and it shows in his numbers.

He is getting to the foul line just 3.3 times per game, roughly half of his rate from the last three full seasons, an indication that he’s pulling up for too many jumpers. His numbers from the three-point line are fairly consistent, so it’s largely the midrange shot that he has abused.

With added weapons on the roster in West, trade acquisition George Hill and a continually maturing cast of characters in Roy Hibbert, Paul George, Darren Collison and Tyler Hansbrough, Granger doesn’t have to shoulder the offensive burden.

Strangely enough, he has looked less rushed and pressured in the clutch. Teams can’t key in on him entirely because West has shown that he is capable of coming through with a basket when time is ticking. West delivered a running one-hander against Cleveland that forced overtime in an eventual win.

Meanwhile, Granger buried the Raptors with a barrage of threes and scored a Reggie Miller-esque nine points in overtime against the Cavaliers.

On the rise last season, especially in November and early December, Hibbert has fallen down the offensive food chain. Instead of being the second option behind Granger, he has often been the third or fourth behind West and George. Even Hansbrough has a higher usage.

In fact, Hansbrough is second on the team in shot attempts per game (11.3).

The trouble with Hibbert offensively is that while his footwork and agility have improved, his hands are worrisome. He has committed 15 turnovers through six games and has botched at least two alley-oop attempts. The turnovers should decrease though, as he has never averaged such a high rate in his career.

What Vogel has to see is Hibbert’s success in scoring on high-quality shots. The presence of West appears to have lessened the defensive attention on the center, allowing him to convert on 57.6% of his attempts. Only seven players have higher shooting percentages this early in the season -- three average fewer shots.

Beginning Friday night, the Pacers enter an important stretch of 13 games that will run through Jan. 29.

They will face the Celtics three times, the Orlando Magic twice and the Bulls once in addition to a three-game Western swing against the Kings, Golden State Warriors and Los Angeles Lakers. They will also face the Atlanta Hawks and Philadelphia 76ers, teams they figure to battle for playoff position later on.

If they come out of that stretch around .500, they will have set themselves up nicely for a run at a playoff seed higher than seventh or eighth.