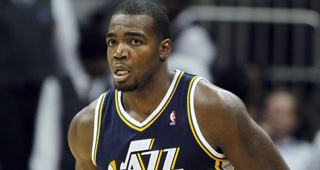 Paul Millsap is in the midst of his seventh season with the Utah Jazz after being selected No. 47 overall in the 2006 NBA Draft.

Since then, Millsap and Boston Celtics guard Rajon Rondo have become the steals of that draft class.

However, with the Jazz in a transition era and Millsap’s contract ending at the end of the season, there’s uncertainty if this is his final season in Salt Lake City.

Millsap spoke with RealGM about the direction of the Jazz franchise and his plans for free agency in the summer of 2013.

Ironically, one of those pieces can replace Millsap if he signs with another team as an unrestricted free agent.

Utah has two rising former No. 3 overall first-round draft picks in Derrick Favors (2010) and Enes Kanter (2011). Both players are seen as core building blocks of the future in Utah.

Utah has Favors signed through the 13-14 season and has the ability to match any offer the forward receives when he becomes a restricted free agent in the summer of 2014.

After entering the NBA three season ago, Favors has steadily improved his scoring, rebounding, free throw percentage and defense.

Similar to Favors, Kanter is young and under control for the foreseeable future with Utah. Kanter is only 20 years old and signed through the 14-15 season when he can then become a restricted free agent.

Kanter physically transformed himself by shedding 50 pounds this past summer. With a leaner physique, Kanter told RealGM he’s now developing a 16-foot jump shot to complement his post game repertoire.

Despite the rise of his two backups and uncertain speculation surrounding his future, Millsap told RealGM those factors haven’t altered where his heart lies.

“Utah,” said Millsap. “You know Utah is my home right now. I’m with the Utah Jazz and if that works out that will be great.”

Despite a preference to re-sign with Utah, Millsap wants fair market value for his services.

Meanwhile, Utah remains undecided if Millsap should remain a core member of the organization or unlock the potential of the two younger and cheaper alternatives.

Millsap also squashed any notion of re-signing with the Jazz during the season.

“After this (past) summer that was it,” said Millsap. “After that, we haven’t talked anything else about it. Now it’s just playing out the season and seeing what happens.”

Millsap is expected to be the second most coveted unrestricted free agent power forward on the market this summer behind Josh Smith of the Atlanta Hawks.

Those headliners include the Detroit Pistons, Charlotte Bobcats and Sacramento Kings.

The Hawks and Indiana Pacers are also dark horse contenders to sign Millsap if Josh Smith and David West are not re-signed.

However, Utah has the ultimate bargaining chip. The Jazz can offer Millsap the most money and seasons.

On the other hand, speculation within NBA circles is that Utah may trade Millsap or frontcourt mate Al Jefferson by the trade deadline.

Both players will command lucrative long-term contracts in free agency and Utah doesn’t want to lose either player without compensation.

Utah could trade either big man for a veteran point guard as insurance in case current starter Mo Williams leaves via free agency this summer.

The Jazz could elect to trade either big man for more young talent or additional first-round draft picks with an eye towards the future.

Expect Utah general manager Kevin O’Connor to earnestly explore Millsap’s trade value on the market as he did with Deron Williams in 2011.

Until the situation is resolved, Millsap will enjoy sharing the frontcourt with Jefferson for the time being.

Jefferson may draw more attention from defenders on the court, but Millsap will even that attention gap this summer on the free agent market.