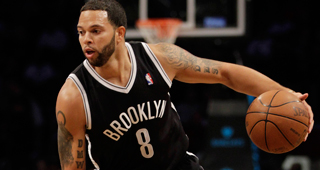 Josh Smith would have fixed many of the Brooklyn Nets' problems. An athletic 6’9, 225 forward with a 7’0 wingspan, his ability to pass, protect the rim and defend multiple positions would have been the perfect complement upfront to Brook Lopez. He’d allow Brooklyn to take their model to its logical conclusion and throw outlandish sums of money at every position on the floor. However, due to the new CBA, they couldn’t just wait to pounce on the Hawks in a sign-and-trade this summer. They actually had to offer some assets at the deadline, but all they had were Kris Humphries, MarShon Brooks and a late first-round pick.

The returns on the new CBA are still coming in, but it looks like it’s having its intended effect. It’s going to be a lot harder for teams to buy their way out of problems going forward. Instead, there will be more of a premium on long-term planning, particularly scouting and developing young players, than ever before. The NBA is going to look more like the MLB, where it takes several years to turn a franchise around. If an MLB team ignores its farm system or where they are on the win curve, it will catch up to them. The Nets could become a test case of what happens when you try to shortcut the rebuilding process in this era of the NBA.

After bottoming out in 2009-10, Brooklyn had the beginning of an interesting roster with Brook Lopez and Derrick Favors. Not only did Lopez and Favors have complementary games, but their development process would give the Nets lottery picks in 2011, 2012 and maybe even 2013. It would have been a slow process, but if the Nets had made the right selections, they would have been one of the NBA’s elite teams by 2014. But, rather than build through the draft, new owner Mikhail Prokhorov was determined to make a splash as he opened the franchise’s new Brooklyn arena, so his management team began auctioning off assets for veterans.

The Nets became the rare under .500 team to be a buyer at the trade deadline when they acquired Deron Williams in 2011. They paid a steep price for the stunning move: Devin Harris, Derrick Favors, as well as their 2011 lottery pick that became Enes Kanter. Their 2012 lottery pick, which became Damian Lillard, brought them Gerald Wallace. Last summer, they used the rest of their assets -- their expiring contracts and a 2013 first round pick from the Rockets -- to pick up Joe Johnson. It’s no wonder the Josh Smith talks went nowhere; the Hawks had already rummaged through the Nets' cupboards.

Two years after the process started, Brooklyn GM Billy King thought he had built a team that could match-up with Miami. In reality, any team with a Brook Lopez / Kris Humphries frontcourt wasn’t defending anyone, much less LeBron James. Even worse, King was paying $60 million to just four guys, two of them on the wrong side of 30. He had repeatedly violated the two cardinal rules of NBA trades: never deal old for young or big for small. He compounded the problem by ignoring the back end of his roster, letting Avery Johnson stuff it with aging veterans rather than grooming young players.

As a team above “the apron” of the luxury tax, the Nets are going to be severely restricted in how they improve their roster going forward. They’ll need to be run more like a college basketball program, with one eye on the future at all times. Mike Krzyzewski is a master at it: he staggers his Duke rosters so they’re never too imbalanced with seniors or freshmen. In contrast, Brooklyn has played Jerry Stackhouse and Keith Bogans over MarShon Brooks for parts of the season. That was almost certainly due to their head coach, but head coaches who can’t or won’t develop young players are a luxury teams will no longer be able to afford.

Brooks may not have the best shot selection or defensive awareness, but he’s a talented and athletic 6’5 200 shooting guard with a 7’1 wingspan. More importantly, at the age of 24, he’s one of their only players with upside potential. And because they weren’t committed to improving him, he wasn’t a very attractive piece at the deadline. It’s hard for another team to sell their fans on a guy getting 11 minutes a night. If veteran leadership is really such a valuable asset, maybe Brooklyn could have shopped Stackhouse and Bogans? Surely other teams would jump to have guys with so many years of NBA experience under their belts.

If they’re going to improve, the Nets need to get the most out of Tyshawn Taylor, whomever they select with their first-round pick in 2013 and the last few spots on their roster. They need Taylor, a second-round pick out of Kansas, to develop into an NBA combo guard and they need to find an athletic 3/4 combo forward to fill out their frontcourt in the draft. To improve their bench, they will have to find more diamonds in the rough like Andray Blatche, a reclamation project that the rest of the NBA had given up on. King will have to find some of the good players in the NBADL and Europe, because he’s going to have a hard time acquiring quality NBA veterans with his team so far above the luxury tax.

For the Nets, it all goes back to that fateful decision to acquire Williams in 2011. Right now, in 2013, would you rather have Williams, Johnson, Wallace, Lopez and no cap room or Favors, Kanter, Lillard, Lopez and room for a max player? Here’s the most ironic part of all: in the 2 years since they went into “win now” mode, they haven’t won a single playoff game. It’s one thing to dump all of your youth and go all-in for a title run; it’s another to go all-in for a team that may not get out of the first round. In the NBA’s new economic climate, unless you have LeBron on your roster, there are no shortcuts to success.