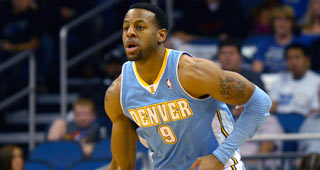 Thanks to the majesty of the NBA’s Collective Bargaining Agreement, organizations can structure their accounting in different ways and open up different methods for acquiring and retaining talent. After giving up two first round picks to dump massive salary in order to bring in Andre Iguodala, the Golden State Warriors actually have the chance to utilize two majorly different methods to build their team the rest of this summer.

The under the cap path:

In order to sign Andre Iguodala using cap space, the Warriors must get sufficiently under the cap (approximately $11.3 million). While we do not know the official number for the 13-14 season until the end of the July moratorium, Marc Stein reported on June 13 that the league expects the final number to be $58.5 million. Using that number as a base, the Warriors would need to get down to approximately $47.2 million in salary and holds in order to sign Iguodala outright.

The players Golden State is locked into contractually (David Lee, Andrew Bogut, Stephen Curry, Harrison Barnes, Klay Thompson, Festus Ezeli and Draymond Green) total about $44.9 million for 13-14. Since teams with less than twelve players on roster during the summer have to carry minimum salary holds ($490,180) for the remaining slots, the Warriors must have at least these holds to fill out the roster. Since adding Iguodala would replace one of those spaces, we can account for four holds to make the estimate. Combining those seven salaries with the four holds puts the Warriors at $46.9 million, leaving about $500,000 in space between there and the maximum salary they could carry to sign Andre. Not very much wiggle room.

Fortunately, since there are already minimum holds on the books for each player, we only need to look at the difference between a player’s salary and the minimum hold.

Based on the salary information I am working from, those margins for non-guaranteed players would be (again, remember that these are not exact):

While it could get incredibly close, it looks like the Warriors could retain one of these four (not Dwyane Jones) and it certainly appears that the one would be Bazemore.

As Chad Ford correctly stated (and I misread and misstated originally), the newest Collective Bargaining Agreement actually allows the Warriors and players whose rights they hold to both sign releases to get those players off of their cap for one season if they promise not to bring the pick over for that season. Golden State can use that to get Nemanja Nedovic’s cap hold off the books if they cannot fit it under the line (his cap hold is about $390k over the minimum salary discussed earlier). In fact, since Kent Bazemore makes the minimum already, the Warriors could actually waive his non-guaranteed deal, bring over Nedovic, and then re-sign Bazemore for the minimum all over again if he was willing.

From there, the Warriors would be allowed to fill whatever spaces they have on the roster with minimum salaries and the “room MLE” worth approximately $2.652 million for next season. Being a hotter free agent destination could allow the Dubs to get better players than usual here and potentially some of the non-guaranteed guys waived above could return here as well.

The over the cap path:

By making a trade with Utah that contained such a massive salary disparity, the Warriors created three trade exceptions (called a Traded Player Exception by the CBA) that count against the cap like the MLE and BAE discussed above. While I am unclear and seeking clarification at the moment for whether Golden State can account for this as one big TPE or smaller ones, Richard Jefferson’s salary for the coming season would generate a hold nearly big enough to give Iguodala the salary he agreed to (four years, $47.59 million by my calculations).

Since the team would be over the cap, they would not need to renounce the exceptions or give up Jarrett Jack’s Bird rights. Golden State would also retain whatever trade exception(s) are left over after acquiring Iguodala. In addition, they could bring over Nemanja Nedovic if desired and keep any or all of the non-guaranteed players.

By acquiring Andre Iguodala in this way, the Warriors would actually turn the apron (a line $4 million over the luxury tax) into a hard cap for the coming season. Staying under the apron would also give them a bigger Mid-Level Exception and also provide use of the BAE and stall another season on the dreaded “repeater tax” that comes into play in the new CBA.

What determines which path the Warriors take:

Unfortunately for the Warriors, the choice of which path they take does not belong to them. Since Denver currently holds the Bird rights to Andre Iguodala, they can choose whether they would be willing to sign and trade him or force the Warriors to go under the cap in order to sign him.

The reason Denver should choose to take the trade exception is that they can use it to make their team meaningfully better. At present, the Nuggets sit at approximately $52.1 million with 12 players under contract (including RFA Timofey Mozgov’s cap hold). Since that is close enough to the cap line to make it helpful, Denver should be acting as a team over the cap to maximize use of their MLE and BAE. Keeping that in mind, the TPE generated by moving Iguodala to the Warriors would allow them to sign Mozgov, use both their MLE and BLE, and then add another player of up to $11 million. They could even take all of those steps without going over the apron and saving their ownership some money.

If Denver wants to put the best possible team on the floor and state a stronger claim on one of the last playoff spots in the Western Conference, they should use the sign and trade to create a useable TPE. Spurned teams like Cleveland and Toronto eventually recanted after losing key players to get trade exceptions and the Nuggets are close enough to contention that they should actually use it. Making the Warriors a little bit better should not be worth actually taking away the ability for your own team to improve.

It will be a few days until we find out what Denver wants to do and which path the Warriors end up taking since no transactions can go through until the July Moratorium ends and a few other deals must happen before this one.