Why The Suns Have Been One Of NBA's Biggest Surprises 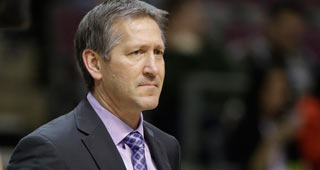 Before the season began, would any of you have believed that the Phoenix Suns would be legitimately contending for a playoff spot as we near the All Star break? Following a disappointing 25-win season, in which both former general manager Lance Blanks and interim head coach Lindsey Hunter were let go, the Suns have managed to post an impressive 23-17 record, good for the eighth seed in the ever stacked Western Conference.

On October 25th, five days before the start of opening day for the Suns, Marcin Gortat along with their 2012 first round selection Kendall Marshall were dealt to the Washington Wizards for the expiring contract of Emeka Okafor and the Wizards’ top-12 protected first round pick in this years upcoming draft. Almost everyone, including the majority of the Suns fan base, saw this as one of many cellar dweller teams waving the white flag well before the season to tank and feast on the upcoming star studded draft class. While we were all left to think about how much of a laughing stock the Suns would be, they have developed a ‘us against the world’ identity as a team under the tutelage of rookie head coach Jeff Hornacek.

“Some of that is just the character of the guys involved, and maybe a little chip on their shoulders,” former Suns’ general manager Steve Kerr explains to 98.7 FM ArizonaSports.com, “it’s a combination of all that, and that’s the trick.”

Hornacek, along with first year general manager Ryan McDonough, have managed to construct a roster ready to compete today along with stockpiling multiple draft picks for this years draft class and in future years too.

Over the offseason, McDonough managed to deal misplaced veterans on the Suns to contenders and gave themselves a couple of young assets of their own. In less than two months as general manager, McDonough somehow managed to deal Jared Dudley to the Los Angeles Clippers in exchange for Caron Butler and the talented and blossoming Eric Bledsoe.

A couple weeks later, McDonough traded talented veteran power forward Luis Scola to Indiana in exchange for journeyman Gerald Green, little known at the time Miles Plumlee, and another first round protected 2014 draft pick. Although this trade with the Pacers was a much less publicized move compared with the Bledsoe move, it was just as beneficial to the team’s success this year.

The combination of Bledsoe and Goran Dragic has been the biggest factor in the sudden renaissance season. While they have merely played 21 out of 40 games together, they have quickly become one of the most feared one-two backcourt punches in the Association. The slashing ability of either guard has helped open up wide-open looks for others around the arc. Just because both players like to slash and get to the rim, they are different types of players in many ways. Bledsoe is more of a guy that uses his body to get to the rim, while Dragic, a crafty lefty, relies more on his footwork and skills to get to the rim. These differences of both guards tend to throw their opponents off.

The additions of Gerald Green and Miles Plumlee from the Scola trade has added much needed depth and dimensions to the young dynamic Phoenix offense. As mentioned by Bill Simmons multiple times, Gerald Green can be categorized as a ‘heat check’ kind of player; the Jamal Crawfords and Jordan Crawfords stay on the court when hot and are left on the bench when not. Green was finally allowed to play in a system where he was given the green light to shoot and fit as a spot up shooter. Hornacek was able to save Green’s NBA career and help Green enjoy a breakout campaign in his seventh NBA season.

Miles Plumlee was able to comfortably fit into a 28-minute center role for the run and gun style of Hornacek ball. His deficiencies on the offensive end has not discouraged Hornacek from using Miles out there on the court. Plumlee knows his role well of rebounding and blocking shots, and to only take shots when they come to him.

The return of big man Channing Frye also has helped add a unique dimension of outside shooting that they had lacked last year. Sidelined the entire previous year due to open heart surgery, Frye has maximized his opportunities to produce as a dependent starting stretch four for bone bruising Miles Plumlee down low. Forty games into the season, Frye is averaging a healthy 12.4 points per game, while nailing a whooping 41 percent of his three point attempts at a 2.2 clip, at an average of 28 minutes played.

Finally, the Morris twins is the other integral portion to help fuse the success that the Suns have produced. Still only 24 years old, both Markieff and Marcus grew up only knowing one way to play basketball, as one. It is not a coincidence that the twins have matching tattoos across their body. Just before the trade deadline last season, Markieff pleaded with the front office in order to unite both him and his brother Marcus. The front office conceded his wish and they were united once again. Having already won Western Conference Player of the Week this season, Markieff leads the bench in scoring at 12 points per game at a 47 percent field goal clip, seven percent higher than his career average.

Similar to how Hornacek played when he was a fan favorite with Phoenix and Utah, he has constructed an efficient offensive scheme that has worked so far for them this season. Instead of settling for long twos, Hornacek has stuck with the high efficiency shot approach, close baskets near the rim or open three pointers. It is not a fluke that seven of the 15 players on the roster have a PER higher than the NBA average of 15, which has helped with their depth. Additionally, Hornachek has given each one of his rotation players a specific role for the team, which is by far the most effective tool that a coach can give to his team to win games and build team chemistry.

Coming as an assistant general manager from Boston, and as a disciple of Danny Ainge working in the Celtics front office for a decade, 33-year-old Ryan McDonough knows what it takes to excel.

“Ryan and I, when we talked about players, probably 99 percent of the time we agreed on what we were thinking,” Hornacek tells ESPNLA. “All the coaches that I talked to said that the biggest thing is, ‘when you get a shot, make sure that you and the general manager are on the same page."

As most of you know, one of the big keys to the success of making the Big Three work in Boston was how Danny Ainge and Doc Rivers were always communicating and knew each others thoughts thoroughly. Even in the end when Rivers left for Los Angeles, both he and Ainge always acted on good faith no matter the circumstance. Rivers did not want to stick around for the rebuilding mode of the Celtics and Ainge granted Rivers his wish.

Not too long ago, Phoenix Sun fans were calling for the head of Steven Nash when he bolted the desert and settled with the division foe Lakers. With how they have managed to stockpile picks, create cap flexibility, and maintain a competitive team out in the Western Conference, Suns great Nash is all but a distant memory to the fans now…