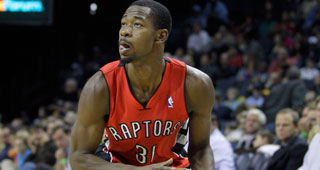 When Terrence Ross broke his commitment with Maryland and signed with Washington in 2010, it looked like the start of something big for the Huskies. A super-athletic four-star guard from Portland, he was a huge get for Lorenzo Romar’s program, which kept him in the Pacific Northwest, beating out schools like Kansas, Kentucky and Oregon for him. While Ross hadn’t played a lot of AAU basketball, his talent made him a national prize in recruiting.

However, unlike many highly-rated freshman in this era of one-and-done basketball, Ross had to pay his dues when he got to Seattle. The Huskies started two senior guards with NBA potential, Isaiah Thomas and Justin Holiday, and had a slew of other underclassmen -- Abdul Gaddy, CJ Wilcox and Scott Suggs -- who needed minutes too. As a result, Ross played only 18 minutes a game, averaging eight points, three rebounds and one assist on 44 percent shooting.

With Thomas and Holiday graduating, Ross moved into the starting line-up as a sophomore. However, the arrival of highly touted freshman point guard Tony Wroten meant Ross would not have the opportunity to dominate the ball at Washington. Instead, he spent most of the season playing off the ball, watching Wroten do his best Tyreke Evans imitation. Ross averaged 16 points and six rebounds a game on 46 percent shooting, but never broke out on the national stage.

Coming into the draft, while he was well-regarded by many talent evaluators, his name never rung out among even hardcore NBA fans. After Florida made a run to the Elite Eight, freshman Bradley Beal was widely seen as the top 2-guard available. Ross had less profile than Austin Rivers, who played for Duke, had a famous father and hit a buzzer-beater over Tyler Zeller on national TV. Ross was just another name in one of the best crops of SG’s in many years.

The Toronto Raptors selected him at No. 8 in 2012, one of the more anonymous lottery picks in a star-studded draft. Ross didn’t make a huge splash in Summer League, so not much was expected of him as a rookie. Playing behind veterans like DeMar DeRozan, Alan Anderson and Landry Fields, he wasn’t afforded the chance to play significant minutes right away. After the Raptors acquired Rudy Gay at mid-season, his role shrunk even further.

Ross finished his rookie season with averages of six points and two rebounds on 41 percent shooting, hardly numbers that indicated future stardom. His biggest splash came when he won the Dunk Contest, but without any statistics to back it up, most fans saw him as another super-athletic flash in the pan, if they noticed him at all. As a result, Ross came into his second season an unknown commodity, a lottery pick with the profile of a late first-rounder.

Not much changed at the start of this season, as Gay and DeRozan took turns boss-hogging the ball in historic  fashion. The low point was probably an early November loss to the Houston Rockets, when Gay took 37 shots and DeRozan fired up 25. Ross, meanwhile, had an efficient nine points on 4-for-6 shooting -- the story of his first 14 months in Toronto. It’s almost impossible for a shooting guard who can’t get minutes or touches to affect a game, one way or the other.

For Ross, everything changed when the Raptors shipped off Gay in early December. All of a sudden, he was moved into the starting line-up, getting as many shots and minutes as he could handle. The team clicked immediately. After going 6-12 with Gay as the primary option, Toronto is 19-9 with Ross as a starter, with wins against Oklahoma City, Dallas, Indiana, Chicago, Brooklyn and New York. Just like that, the Raptors became a team on the rise.

Every member of their 9-man rotation, as well as Dwane Casey, deserves some credit for that, but Ross has more than done his part. In 18 games as a reserve, he averaged six points and two rebounds on 41 percent shooting. In 27 games as a starter, he is averaging 13 points, four rebounds, one assist and one steal on 42 percent shooting. While most players get less efficient in a bigger role, Ross’ efficiency has increased, an indication he is getting more comfortable in the NBA.

At 6’6 200 with a max vertical of 38’, Ross is a prototype shooting guard in a league moving towards more two PG lineups. When he plays a team like the Portland Trail Blazers, who have three combo guards - Damian Lillard, Mo Williams and CJ McCollum -- in their rotation, he has a huge edge in size and leaping ability for large stretches of the game. That fits perfectly with his skill-set; he’s a pure shooter who can run off screens and rise up immediately.

And while Ross is shooting 41 percent from deep on 4.7 three-pointers per game, he is more than just a shooting specialist. He has the quickness to beat his defender off the dribble and he is one of the best finishers in the NBA, as Manimal found out on Friday. Unlike most scoring guards, Ross is unselfish enough to move the ball and not hunt for shots. He takes what the game gives him; he’s Kyle Korver with the ability to put the ball on the ground and a 40’ vertical.

Ross gets points as easy as any guard in the NBA, although you wouldn’t always know it even from his breakout season, since he still shares the ball with DeRozan and Kyle Lowry. It’s no coincidence that his break-out game last week, when he dropped 51 points on the Los Angeles Clippers, came on a night when DeRozan was limited after rolling his ankle. Ross needed only 29 shots to get 51, scoring from every part of the floor with absolute ease.

In the three games following his explosion, Ross has taken only 33 shots, an indication of where he is in the Toronto pecking order. However, there’s only so long a guy with his ability can be held down. He’s a complete guard with the ability to score, shoot, pass, rebound and defend, a starter and two-way contributor on one of the best teams in the NBA. Most impressive of all, he’s still only 22. He should be a senior in college, the same as Doug McDermott.

Over the last generation, many of the league’s best shooting guard prospects have been undone by getting too much too soon. Ross has been the exact opposite, an All-NBA talent forced to pay his dues and learn the game at every stop of the way. Now after a three-year apprenticeship, he is starting to come into his own. In three years, when he’s 25, he will be one of the best SG’s in the NBA. He’s Paul George in 2011, a young role player on the cusp of stardom.