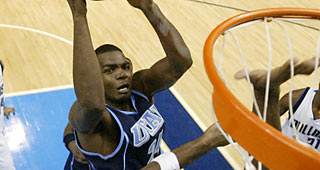 Al Jefferson leads the Jazz in average scoring (19.1) and rebounds (9.6) this season. And he did not find his real rhythm until after the All-Star break, since which he ranks fifth out of all players in points (25.1), topping stars such as New York’s Carmelo Anthony, Oklahoma City’s Kevin Durant and Orlando’s Dwight Howard.

While the undersized interior pair of Jefferson and starting power forward Paul Millsap has been an offensive dream, it's a defensive nightmare for the Jazz. Moreover, Utah ranks 28th out of 30 teams in rebounding (39.3).

With the recent acquisition of power forward Derick Favors, Millsap has an possible solution to Utah's front line dilemma. Move Millsap to the small forward position.

Millsap’s ballhandling has continued to improve. He consistently beats opposing defenders off the dribble. And his outside shot has developed to the point that one of the few automatics for Utah has been the sight of Millsap pulling up for and draining a smooth 18-foot jump shot.

“I think with a preseason, [a summer] to prepare for it — to know that I’m going to be in that position — I think it’d make that transition smoother,” Millsap said.