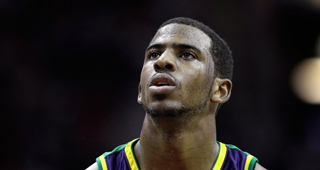 The blockbuster Chris Paul trade is off, according to ESPN's Marc Stein. Other media outlets have confirmed that the deal is dead.

NBA owners have pushed David Stern to kill a proposed trade that would send Paul to the Lakers from the NBA-owned Hornets.

Owners were irate with Stern during Thursday's Board of Governors meeting.

Hornets' GM Dell Demps received pressure from the NBA to back out of the agreed-upon trade and keep Paul, say sources.

The Rockets were also involved in the trade that was agreed upon in principle. Pau Gasol would have gone to Houston, while Kevin Martin, Luis Scola, Lamar Odom and Goran Dragic were set to be deal to the Hornets.

"WoW," wrote Chris Paul on Twitter as a response.

Paul will report for Hornets training camp on Friday.

The early consensus from most experts was that the Demps had received good value in return for Paul, while the Lakers were taking a big gamble by giving up so much. Several GMs believed the Hornets received a good return considering their lack of leverage.

"The owners half-pushed this through, and Stern took it the rest of the way," a league source said. "In the end, David didn’t like that the players were dictating where they wanted to go. He wasn't going to let Chris Paul dictate where he wanted to go."