Malcolm Thomas Working Out For Knicks 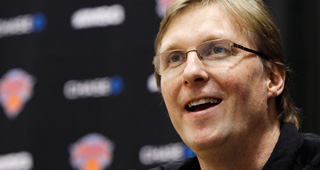 Free agent forward Malcolm Thomas is in New York and will work out for the Knicks over the next two days in an effort to land the team’s final guaranteed roster spot, league sources told RealGM on Wednesday.

The Knicks’ front office has long been impressed with Thomas, but workouts on Wednesday and Thursday are meant to showcase the 23-year-old in front of the team's coaching staff.

While New York added several players to its training camp roster on Tuesday, Thomas is vying for a guaranteed contract with the Knicks, who currently have one such slot available. Seeking guaranteed money, Thomas’ agency has made it clear that he will not sign a training camp deal.

Thomas shined as a key contributor on the Chicago Bulls’ summer league team in July, being selected to the Vegas All-Star squad with averages of 11.4 points and 12.4 rebounds.

Over the past week, Thomas has been sorting through offers from NBA, EuroLeague and Chinese teams.