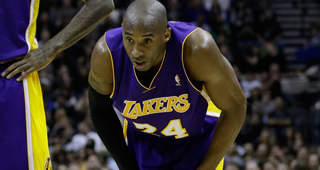 MILWAUKEE – After the Los Angeles Lakers’ 113-103 loss to the Bucks on Thursday night, Kobe Bryant left the arena on a crutch as he couldn’t place pressure on his left foot, headed to a specialist Friday in Sacramento.

The Lakers won’t fly out to Sacramento until Friday morning and said they’ll provide an update following Bryant’s visit to the specialist after a bone spur in his left foot flared up. Bryant spent extended stretches of the fourth quarter with a wrap around his left foot without his shoe on. With 6:47 left in the fourth as the Lakers called a timeout down three points Thursday, Bryant sat near the end of the bench, removed the wrap on his foot and entered the game.

Bryant led the Lakers with 30 points, but he committed six turnovers and missed all three 3-point attempts. As Marquis Daniels crowded him physically all night, Bryant vented his frustration to the officials throughout the game.

Before opting for one crutch to bring Bryant out of the Bradley Center, the Lakers briefly considered using a wheelchair, two people with knowledge of the injury told RealGM late Thursday night. Bryant sat out two straight games earlier in the week with a severe left ankle sprain.

“Regardless of how [Bryant’s] feeling, he always plays – unless he can’t walk," Jodie Meeks told RealGM after the game. “So he’ll be ready for us.”

One player after another, the Lakers have been decimated by injuries this season, most recently losing Metta World Peace to a torn meniscus in his left knee. Steve Nash also sat out the final 17:13 of Thursday’s game with a right hip injury, but both he and Mike D’Antoni expect him to play on Saturday against the Kings.

Lakers players know they need everyone at this point, and the Utah Jazz are just a half-game behind Los Angeles for the eighth seed in the Western Conference.

“We don’t need anybody else to get injured or be out or miss any games, especially at this point in the year,” Pau Gasol said. “Let’s see what happens. Hopefully Kobe will be healthy for next game.”