J.R. Smith To Opt Out, Likely To Re-Sign With Knicks 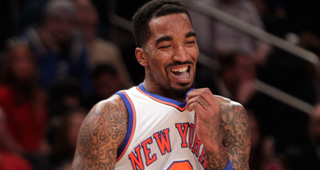 J.R. Smith will decline his player option of $2.9 million for the 13-14 season with the New York Knicks, a source confirmed.

Smith is "likely" to re-sign with the Knicks, according to a second source.

Smith averaged 18.1 points and 5.3 rebounds during the regular season.