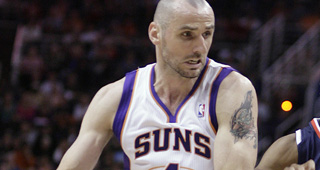 One day after the Phoenix Suns drafted Alex Len with the fifth pick in the NBA draft, Marcin Gortat was assured by the organization that it has no plan to trade him – for now – and might want to make him part of the future, his agent Guy Zucker told RealGM.

After the draft, Gortat had understood the Suns’ clear transition into retooling the roster, leading to belief a trade would be beneficial to both sides. Yet, Suns coach Jeff Hornacek said Thursday that Gortat would fill a mentoring role for Len.

“It’s clear they are in a rebuild and they drafted a center, so [a trade] would make sense, but for now they want to hold onto him,” Zucker said Friday afternoon. “As with everything in the league, it should be stated: As of today.”

Throughout most of the season, Gortat had been in trade speculation and made clear his desire to be a contributor on a winning team.

Gortat, 29, has one season left on his contract and could start negotiations on an extension in July. He has established himself as a double-double center over the past three years, enjoying a career season with Steve Nash two seasons ago. Gortat averaged 11.1 points, 8.5 rebounds and 1.6 blocks in 61 games last season.