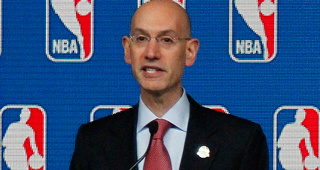 The NBA issued a statement Wednesday afternoon acknowledging that officials missed a goaltend call on Jermaine O'Neal's block of Monta Ellis with 16 seconds remaining in the Golden State Warriors' 122-120 overtime win over the Dallas Mavericks on Tuesday.

“Upon review at the league office, we have found that a shot taken by Dallas’ Monta Ellis with 16.0 seconds remaining in overtime was on the way down when initially contacted and ruled a block by Golden State’s Jermaine O’Neal, and should have been ruled a goaltend," Rod Thorn said in a statement regarding the no-call. "The exact trajectory of the ball when touched was impossible to ascertain with the naked eye, and the play was not reviewable.”

The loss pushed the Mavericks out of the top eight in the Western Conference playoff picture and a half-game behind the Phoenix Suns and Memphis Grizzlies.