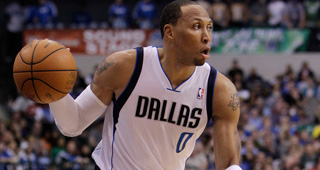 Shawn Marion, the best unrestricted free agent on the market, has received inquries from the Indiana Pacers and a strong push on a potential deal with the franchise, a league source told RealGM.

Marion spent a half-day in Cleveland to meet with the Cavaliers on Monday, and he remains intrigued about the opportunity to join LeBron James and possibly Kevin Love – even on a veteran-minimum contract.

Marion has since left Cleveland and is scheduling further meetings with NBA teams, a source said.

The Pacers had reached out to Marion early in free agency, before signing C.J. Miles and Rodney Stuckey. In the wake of Paul George’s injury, Indiana has turned its attention to replenishing the wing position and several veteran scorers remain available, including Jordan Hamilton and Jordan Crawford.

For five seasons, Marion stabilized the Dallas Mavericks with a high-energy, durable and productive starting small forward – signified in the 2011 championship. The 36-year-old averaged 10.4 points, 6.5 rebounds, 1.6 assists and 1.2 steals in 76 games last season.