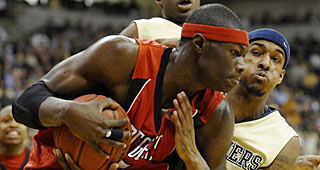 After the Brooklyn Nets voided his free-agent deal due to a failed physical, Hamady Ndiaye will most likely sign in the Chinese Basketball Association when his injury recovers to full strength, a source told RealGM.

Several Chinese teams have been in discussions with Ndiaye before and after his decision to join the Nets for training camp.

A seven-footer out of Senegal, Ndiaye was a second-round draft acquisition in 2010 to the Washington Wizards, with whom he spent two seasons. The 27-year-old earned a spot on the Sacramento Kings out of camp last season and appeared in 14 games.

Ndiaye has played 33 NBA games in parts of three seasons — including stints in the Development League. He spent the 2012-13 season in China with Tianjin.

Ndiaye played his college basketball at the Univerity of Rutgers.