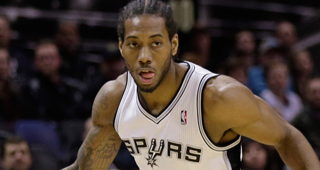 Kawhi Leonard and the San Antonio Spurs have broken off talks on a contract extension.

Agent Brian Elfus and Leonard have held firm on their desire for a maximum contract extension, something Spurs management won’t consider until July.

“We feel Kawhi is deserving of a max contract, and we are disappointed that something couldn’t get done,” Elfus told Yahoo Sports. “There’s no debating Kawhi’s value. The market has been set. He’s done everything the Spurs have asked of him, exceeded all of their expectations. Coach [Gregg] Popovich has gone out of his way to call Kawhi the future face of the franchise. We have great respect for the Spurs organization, but here, we simply agree to disagree.

“There will be no shortage of teams interested in Kawhi’s services next year. There will be a lot of contract scenarios available to us, and we will explore them all.”

San Antonio could sign Leonard to a five-year, $90 million-plus extension now or next summer, if the Spurs are willing to make him their designated player. But Leonard could also sign an offer sheet with a rival team that includes a player option in the third season that would allow him to potentially leave the Spurs in 2017.

Sources say the Spurs want to keep Leonard's contract off the books until they can explore free agent targets, especially since Tim Duncan and Manu Ginobili could retire.

Leonard would have a significantly smaller cap hold than what would be the first season of a max or near-max extension.