Randy Wittman Expected To Be Fired By Wizards 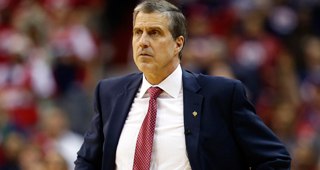 The Washington Wizards are expected to fire Randy Wittman this offseason.

"I mean, look, Randy's probably 99 percent certain he's going to be fired on Thursday morning," Brian Windhorst said. "There were people who legitimately made the case that the Wizards would have finished with the No. 2 record in the East this year and that they had all of the weapons required to go to the Eastern finals and make a run. Granted, they had so many injuries -- for a while, I think three-quarters of the way through the season they had the most games missed -- but their complete collapse defensively and their inability to execute despite really having a lot of weapons at their disposal was just embarrassing. A lost season, not only because of the [Kevin] Durant thing."

The Wizards reached the second round last year and missed the playoffs altogether this year.