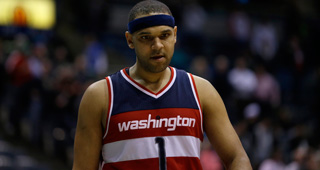 Jared Dudley would like to re-sign with the Washington Wizards this offseason but he's seeking a three-year deal.

Dudley exercised his $4.25 million player option last offseason knowing back surgery was likely. Dudley figures to get a raise with the cap increasing.

“I thought I held my end of the bargain when it came to Ernie [Grunfeld] trading for me even though I was hurt at the time,” Dudley said after the Wizards’ season finale. “Going forward, I could definitely see me coming back. As I told some other reporters, I’m never anybody’s first or second or third option, I’m your fourth option. So if you don’t get your girlfriend you want right away, I’m the one at the end. For me, it’s no problem. You know what I can do in this system. When I play, I play the right way.”

Dudley played both forward positions for the Wizards.

“For me, the two things I wanted to basically show this year, for one, I wanted to show that I was healthy and show I could play the four,” Dudley said. “I thought I did that for 80 percent of the season.”