Andre Iguodala: It Must Be Fun Playing With A Guy Like Kevin Durant 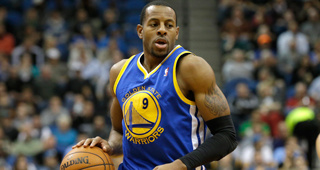 Andre Iguodala was given the primary responsibility of defending Kevin Durant in the Western Conference Finals.

"He made some really tough shots, which is what I expected," Iguodala said of Durant. "He's a fighter and competitor and fought to the end. It must be fun playing with a guy like that."

Iguodala quickly added a follow-up: "Unless I'm not playing with him."

The Golden State Warriors plan on pursuing Durant in free agency but that would likely require trading away one or more members of their rotation.

Iguodala and Durant were teammates on Team USA for the 2012 Olympics.