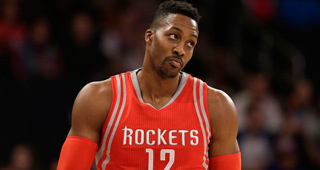 Dwight Howard has interest in signing with the New York Knicks.

The Knicks are expected to have at least $30 million in cap space this summer.

Last offseason, the Knicks signed Robin Lopez to a four-year contract and he had a productive season.

The Knicks' top priorities this offseason have been their backcourt and it is unclear what level of interest they would have in signing Howard.