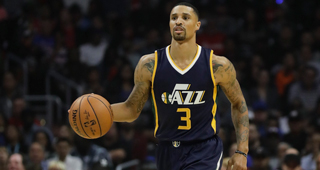 While the Utah Jazz would like to re-sign George Hill, he is also receiving interest from the Denver Nuggets and Indiana Pacers.

Hill turned down a renegotiate and extend offer from the Jazz in February, who traded for Ricky Rubio on June 30th as insurance in case Hill leaves.

The New York Knicks also have interest in Hill.

“Denver and Indiana are a little more further along,” one NBA source said in the Hill hunt.

Indiana traded away Hill in June of 2016 and traded Paul George on June 30th, signalling their intention to rebuild. Hill is a native of Indianapolis.