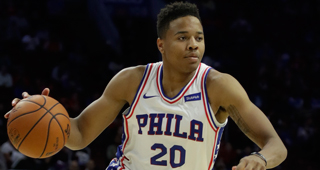 The Philadelphia 76ers will bring Markelle Fultz off the bench to begin his rookie season.

Fultz was limited in preseason due to soreness in his right knee and right shoulder, playing a total of just 47 minutes.

“He hasn’t played much basketball in preseason,” Brett Brown said Sunday after practice. “He’s been out for a while. He hasn’t been with our group. I think the decision like, do you put him into the fire right away and have him play against starting NBA defensive players, especially with the little foundation that he has? I don’t think that’s smart.”

Fultz is prepared to accept the assignment despite being the first overall pick.

“At the end of the day, I want to do whatever I’ve got to do to help my team win,” Fultz said. “So if that’s coming off the bench, I’m fine with that. Just contribute any ways I can.”