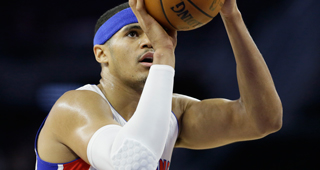 The NBA announced that Tobias Harris and Nikola Jokic have been named the NBA's Players of the Week.

“I’m honored to be named Eastern Conference Player of the Week, but this is truly a testament to how well we’ve been playing as a team,” Harris said. “My coaches and teammates put me in positions to succeed and this recognition is a result of the hard work we put in, as a group, during the offseason and training camp.”