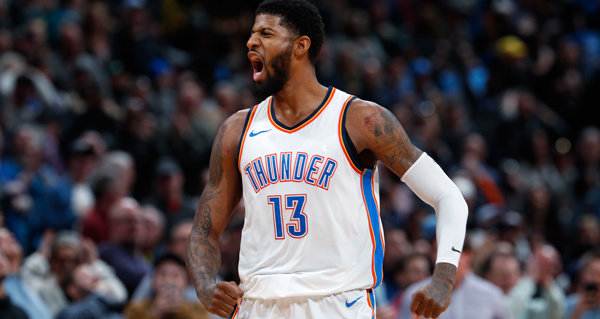 The Oklahoma City Thunder remain confident in their odds of re-signing Paul George this offseason.

"I think there's a lot of positivity around it, and I think even around Paul George, there's a sense he feels like he's in a good place in Oklahoma City. But things change," said Shams Charania. "There's different dominoes that's going to change over these next few weeks. LeBron James is probably the biggest domino that's going to drop. Until the league gets ahold of what his aspirations are, Paul George can very well decide to stay in Oklahoma City and not wait for what LeBron James is going to do."

Charania also suggests George will likely have a conversation with James at some point this offseason before reaching a decision.

But George has also developed a strong relationship with Russell Westbrook.

"Paul George has become really close to Russell Westbrook and I think that's a relationship that you can't quantify. I think that means a lot for the Thunder franchise. They might be bonding better than Kevin Durant and Russell Westbrook did during Kevin Durant's free agency. They're spending a lot of time just, you know, doing what friends do. That could go a long way for Oklahoma City as it goes into July 1."