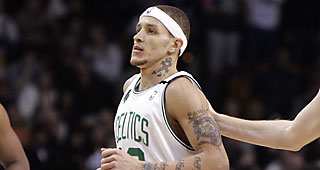 The perilous welfare of Delonte West came to light on Monday with video of him being kicked and punched while shirtless on a highway in Maryland surfacing on social media.

West has most recently worked in construction with his brother, Dmitri, and has struggled to find consistent work, one person close to the former player said. He lives in Maryland with his mother, Delphina Addison.

“Really sad,” one of West’s longtime confidants said. “Your heart breaks for him.”

“We all love Delonte, and we don’t want to see him like this,” offered another. “We want him to figure his life out.”

West was diagnosed with bipolar disorder in 2010.

Professional basketball gave structure to West's life and that has gone by the wayside since he left the game.

The NBPA helped facilitate his residence change from Dallas to Maryland in recent years and extensively supported him financially, as recently as this month, sources tell Shams Charania of The Athletic.

Danny Ainge and the Boston Celtics hired him as a scout to attend games on the East Coast, but results have been mixed due to inconsistent attendance.