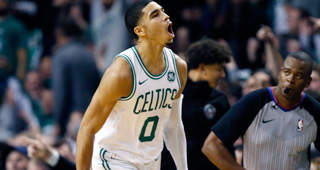 The Boston Celtics entered the 18-19 season with lofty expectations following their 2018 appearances in the Eastern Conference Finals without Kyrie Irving and Gordon Hayward.

But the Celtics never managed to be as effective as the sum of their parts.

Jayson Tatum was one of the players who seemed to regress from the previous season.

"Last year for me, especially when things weren't going my way, unfortunately it translated to defense," Tatum said. "I wasn't as engaged when I wasn't happy. That happened a lot last year. They were some very tough days, more often than not. It really wasn't any fun."

Younger players on the Celtics hoped to take a step forward in their development, while Kyrie Irving and Marcus Morris Sr. sometimes had a heavy-handed veteran approach.

Tatum's closest friends on the Celtics last season were Irving and Morris, but he was also firmly in the younger player camp based on age.

"I did kinda feel like I was in the middle sometimes," Tatum said. "You read all these things on the internet. I felt like every day last year when I woke up and turned on the TV they were talking about us, our locker room and all the chemistry problems. It was tough. You see that, and then you have to come to practice.

"We all tried to stay in a good mood for the most part, but everybody was frustrated. Nobody played, either individually or teamwise, the way they wanted to. Everybody had goals they wanted to reach and nothing was going our way."