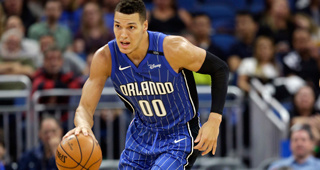 The Orlando Magic had trade discussions involving Aaron Gordon ahead of the deadline last week. The Golden State Warriors were one of the teams engaged in talks as the Magic had interest in D'Angelo Russell during the 2019 offseason.

“They were trying, and they tried hard to get something done with him at the deadline," a source said of Gordon. "All that gets brought back into focus once the season is over and you have a good idea what the market is for him.”

Gordon has not been trying to get traded as he's been content with the situation.

Gordon signed a four-year, $76 million contract with the Magic in 2018, but his fit with Jonathan Issac in the Orlando frontcourt is less than optimal.

The Brooklyn Nets, Phoenix Suns, Denver Nuggets and Dallas Mavericks are mentioned as three teams who could pursue a trade for Gordon in the offseason.