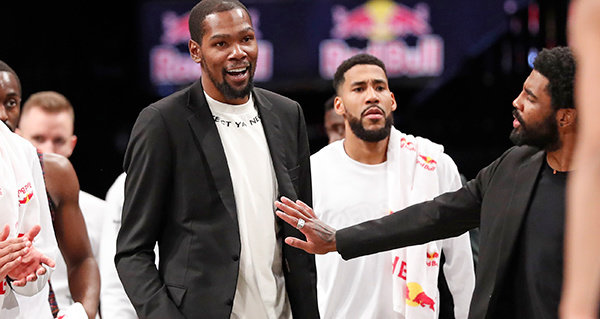 On January 25th 2019, Kyrie Irving had Kevin Durant over for dinner at his home outside Boston on the eve of a nationally televised game between he Boston Celtics and Golden State Warriors, according to accounts described in Matt Sullivan's new book 'Can't Knock The Hustle.'.

Irving and Durant were a few months away from becoming free agents. For Irving, it would be his first time experiencing free agency. A few months prior, Irving publicly said he intended to re-sign with the Celtics but the death of his grandfather a few weeks later sent him into a period of depression.

Durant had won two straight titles with the Warriors, but he didn't think the team would get any better if Steve Kerr didn't hold Draymond Green accountable for his outbursts and was also occasionally irked by the attention Stephen Curry received from the media and fans.

Durant ate a vegan burger for the first time that night and a superteam began to take shape with Irving.

Irving and Durant saw the Nets as a franchise with two max salary slots, a flexible general manager and a few existing supporting pieces already in place.

"And from that point," Irving said, "we took the power back and put it in our hands."

Durant and Irving eventually committed to the Nets and also made sure they also signed DeAndre Jordan.

"I don’t think there was a moment when Ky took it over from us," a Nets executive involved in his recruitment told Sullivan. "We all understood — basically everybody who is following the NBA understands — he’s a personality. But we were at a point where we thought the organization is strong enough, and the culture is strong enough, to survive or absorb different personalities. Whether that assumption is true remains to be seen."