Brad Stevens: Celtics 'Going To Find Out' If They Have The Right Players 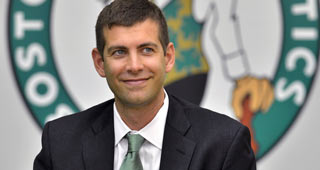 The Boston Celtics have gotten off to a poor start, with a 2-5 record. Boston has lost twice in overtime, as well as suffering a historic collapse against the Chicago Bulls on Monday.

Following the loss to the Bulls, Marcus Smart had pointed criticisms for Jayson Tatum and Jaylen Brown. Smart said as the team's stars, they need to be willing to pass the ball more often late in games. Smart believes this will allow them to get easier shots, as opposed to the Celtics isolation-heavy approach to crunch time.

Boston's President of Basketball Operations Brad Stevens was asked about his thoughts on Smart's comments. Stevens said, “When you’re in it, when you see guys at the facility and you see (Marcus Smart) and Jayson (Tatum) eating breakfast together today and talking about it, ‘How do we come to find a solution for our team?’...Those guys want to win and at the end of the day, I think that’s the most important thing."

When asked about the growth of Brown and Tatum, Stevens said, “When you’re talking about our two young guys, Jaylen and Jayson, their next steps are hard because of where they are right now. They’re already up a ton of steps. An All-Star, two All-Star appearances for Jayson, so those next steps, they take a lot and I do trust that those two guys will make those. Their work, their care, their commitment, I believe they will make those steps."

Stevens expressed some optimism that the Celtics have the right mix of players to win this season.

“We’re going to find out,” Stevens said. “Last year, we were 8-3 to start the year and it didn’t feel like 8-3 from my perspective, from the seat I was in. I felt like we had a lot of things we had to account for and we had to be a lot better in, and then we got hit with other stuff. Right now at 2-5, I feel a lot better from the structural stuff than 2-5.”