Dejounte Murray Would Not Sign Extension Off Current Salary 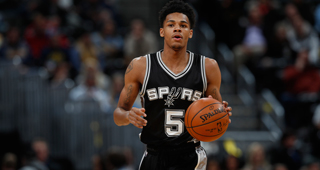 Part of the San Antonio Spurs motivation to trade Dejounte Murray may have been the guard's insistence that he would not sign an extension. The Spurs have agreed to trade Murray to the Atlanta Hawks for a package including three first-round picks, rights to swap another first-round pick and Danilo Gallinari.

Speaking on The Hoop Collective, ESPN's Brian Windhorst said, “(Murray) and his agent, Rich Paul, made it known that he was not going to extend his contract with the Spurs this summer.”

In Murray's defense, the Spurs could only offer him a 20% bump in salary off his current $16.6 million deal. That's well-below market value for the All-Star guard. Murray will likely let his current contract play out, then he'll hit free agency in the summer of 2024.