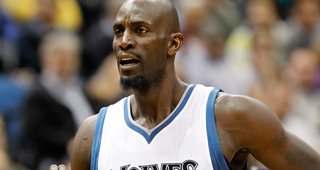 Kevin Garnett was a recent guest on The Players' Tribune's Knuckleheads Podcast hosted by former NBA player Darius Miles and Quentin Richardson. The three did a retrospective on Garnett's life and career.

When it came to the Minnesota years, Garnett said he thought he and Stephon Marbury were going to dominate the NBA.

“I thought Steph and I was gonna be forever, and I thought out of that, we was probably gonna get a couple, even with the Shaq and Kobe s***. But yeah, at that time, man, that s*** blew me. Steph leaving Minnesota blew the f*** out of me. I didn’t understand it. To this day, I still don’t understand it. It was Stephon Marbury; it was his decision. It wasn’t an ‘Us’ decision.”

Marbury's tenue with the Timberwolves last just two-and-a-half seasons before he was traded to the New Jersey Nets. The young, upstart Wolves made the playoffs in each of Marbury's two full seasons with the team.

Garnett and Marbury would later reunite with the 2009 Boston Celtics. Unfortunately, the two only saw action together in four games, as Garnett missed most of the second half of that season due to a knee injury.