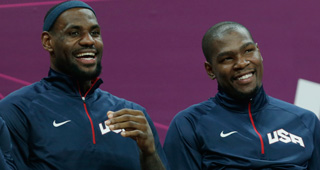 The Team USA 2012 comparisons to the original 1992 Dream Team were inevitable, but the general consensus in what has become an excessively debated issue is that the current team is a few future Hall of Famers short.

More interestingly, Ian Thomsen’s report that it is unlikely for the under-23 rule to be implemented in time for the 2016 Olympics in Rio de Janeiro puts a new Dream Team that could realistically make the argument as greatest team ever assembled truly into play.

Check out the ages during the two weeks of August in 2016 of 20 potential Team USA players.

Similar to that projected 2016 roster, nearly the entire roster was in their absolute prime. They also had Larry Bird and Magic Johnson included in a more ceremonial capacity.