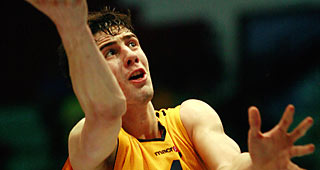 The United States wrapped up their anti-climatic run through FIBA World Cup with another resounding victory over an overmatched Serbia squad. While this tournament emphatically demonstrated that teams around the world aren’t ready to compete against Team USA’s collection of stars, a few unheralded individuals on the outskirts of the NBA radar showed they are. That collection of players can pretty much be broken down into three groups: the ones who have been there and done that (Rudy Fernandez, Juan Carlos Navarro, etc), younger players with NBA ties (former first round pick, Petteri Koponen, 2013 second rick pick Joffrey Lauvergne and Joe Ingles) and finally those stuck in NBA limbo.

Limbo is the best way to describe the area where players whose skill and production have them vacillating back and forth between starring on the top teams in Europe or filling out the bottom half of NBA rosters. In this Basketball World Cup, Milos Teodosic, Emir Preldzic, Ante Tomic showed us (or reminded us) that they can contribute to NBA teams. For those three, it’s not so much a question of talent as it is a combination of fit, age, money and comfort, similar to the situation faced by some American players.

To NBA teams looking at Milos Teodosic: He's 27-years-old, on a three-year $7M contract in Russia.

Three of those players -- Teodosic, Preldzic and Tomic -- are 27-years-old, a weird age when it comes to NBA prospects. No longer can stateside suitors view them through the lens of potential, as that age signals the beginning of a players prime. Teodosic, Preldzic and Tomic all can certainly get better and add things to their game, but for the most part they are fully-realized as basketball players.

At 7’2” with good mobility and a soft touch, Tomic, whose rights around held by the Utah Jazz, is ready to step in and boost an NBA offense. During this tournament with Croatia, Tomic reaffirmed that he can score in the post against other big men and cause problems for opposing defenses as a screener in the pick-and-roll. Were Tomic in the NBA, he would trail only Marc Gasol and Tiago Splitter when it comes to passing while rolling to the basket -- an extremely valuable skill given how good NBA defenses have gotten at preventing roll men from finishing at the basket.

Based off his strengths, it seems like a no-brainer for the Jazz (or another team who trades for his rights) to bring him over. However, Tomic isn’t a complete player. He would likely struggle with the more physically demanding NBA (both in terms of players and the schedule) and he’s not a great rim protector or rebounder despite his size and mobility. Factor in these warts and you get a player who likely tops out as a backup center for a team that will utilize his pick-and-roll strengths for short stretches. While NBA big men capable of making any type of positive impact can get rewarded with lucrative deals, Tomic’s age guarantees that his second contract -- when he could secure better money than he makes for his current club, Barcelona -- will likely come when he’s on the wrong side of 30. And that’s not even factoring that just to come over and test the NBA waters, Tomic would likely have to take a pay cut from the 3.4 million dollars he’s reportedly earning in Spain.

Money is also going to be the biggest obstacle for Teodosic as well, who is currently well-compensated by CSKA Moscow, an annual contender for the Euroleague crown.

At best, Teodosic’s combination of passing, shooting, pick-and-roll play and game management makes him an easy comparison to the Knicks new point guard, Jose Calderon. Calderon has long been an underrated offensive force but the Toronto Raptors spent his entire tenure there looking to replace him as a starter due to obvious defensive shortcomings. A similar fate could await Teodosic. Though perhaps an even better playmaker than Calderon, Teodosic’s allergy to defense may prevent teams from either ponying up the dough or giving him a role similar to the one he currently is enjoying overseas. If there’s not an intense desire to leave Eastern Europe for the challenge of the world’s best league, it’s extremely possible that Teodosic never suits up for an NBA team.

Where Tomic and Teodosic’s fit in the league is beyond a doubt, Preldzic doesn’t have the same clear cut role that awaits him. With the size to play either forward position (though maybe not the four full time), Preldzic is classic point forward, In four of Turkey’s six games, including their battle with the U.S., Preldzic had five assists. A 6’9” player that can handle, run pick-and-roll and pass like Preldzic is an extremely attractive player. But an NBA team won’t be crawling all over themselves to bring Preldzic over and hand him the reins to their offense, which he has for both Turkey and his club team, Fenerbahce.

Preldzic is talented and unique, but he’s not a star. And in the NBA, it’s the stars that will have the ball in their hands while everyone else adjust to life without out it. Wing players not named “James”, “Durant” or “Anthony” are primarily asked to do two things in today’s NBA: knock down 3’s and play defense. Neither of those two things double as a strongsuit for Preldzic. A forward-thinking NBA executive could try to carve out a situation where Preldzic handles the ball as reserve forward in a bench-heavy unit, but most front offices don’t cater to non-elite talents in such fashion.

America will long have a monopoly on basketball but will always look to import the best players from outside the U.S. and let them showcase their talents on basketball’s brightest stage. We like to think that the NBA will always contain the best of the best. But as Tomic, Teodosic and Preldzic used the FIBA World Cup to remind us, sometimes players with the ability to play in the world’s best league, won’t always get their shot.