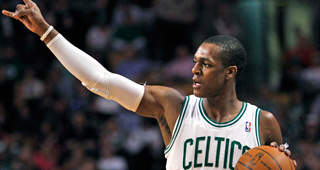 Rajon Rondo has spent the better part of his eight-plus years with the Boston Celtics on the trade block. He wasn’t considered good enough to start at point guard for a club that dealt for Ray Allen and Kevin Garnett as a second-year player, but then helped lead the Celtics to the 2008 title.

Rondo had to be corralled and directed by Doc Rivers, Paul Pierce, Allen and Garnett, but the core spent another four seasons together after winning banner No. 17 until Allen left as a free agent after the 2011-12 season and a crack in the foundation formed.

Rivers, Pierce and Garnett departed a season later, leaving Rondo by himself as the Celtics transitioned slowly away from contention. Danny Ainge remained in control of the organization’s future, along with underrated executive Mike Zarren, which until Thursday night remained clouded by Rondo’s presence.

Rondo is undoubtedly a mercurial guy, on and off the court, but for all intents and purposes he played the role of good solider in the post-Big Three era. Injuries have made it difficult for him to play at full-strength, but he publicly supported Brad Stevens when he could easily have undermined the rookie coach. The only possible visible indication that Rondo wasn’t “all-in” this season was erratic play, something that wasn’t entirely new.

It carries value, even if is doesn’t in terms of wins and losses, but Rondo was better in the community than most realize. He spent his last few hours as a member of the Celtics at Boston’s Children’s Hospital handing out Christmas gifts. He didn’t seek out attention for altruistic acts, which runs in line with his personality. Anyone who has been around the Celtics knows that Rondo doesn’t like to talk about much.

For all the good Rondo has brought to the organization since his draft rights were acquired from the Phoenix Suns in 2006, a trade was long overdue.

We fixate on folklore and hyperbole in sports and Ainge has benefited from both during his lengthy tenure in Boston’s front office. He was named the club’s President of Basketball Operations on May 9, 2003 and over the next four seasons the team compiled a 138-190 record.

He used the fifth overall pick and some spare parts to land Allen in a draft night deal with the now extinct Seattle Supersonics in 2007 and a few weeks later worked with former teammate Kevin McHale on a blockbuster trade that brought Garnett to Boston.

The Celtics, who won just 24 games in 2006-07, went on to beat the Los Angeles Lakers in six games the following June. The idea of three stars aligning in one place was born thanks to the strongest month of Ainge’s career as an executive.

To his credit, Ainge did a good job of finding pieces to put around Allen, Garnett, Pierce and Rondo as the first three lost steps to age. That incarnation of the Celtics didn’t win another title, but they were successful nonetheless. They lost at the hands of the Lakers in the 2010 NBA Finals and made an improbable run to the Eastern Conference Finals in 2012, drawing the best out of LeBron James and the Miami Heat in seven games.

Intoxicated by unexpected success, Ainge missed signs pointing to the end after that season. The Celtics weren’t good enough to win a title in 2011-12, but somehow came within five wins of another championship. Allen left that summer, infuriating the remainder of the core for betting against more success going forward. He turned out to be smarter than they were.

Allen left feeling disrespected, which may or may not have been a fair assessment of how the Celtics valued him as a free agent. With Pierce and Garnett seemingly on borrowed time in Boston, rumors began to surface that the future Hall of Famers would eventually be traded.

Ainge took his time, but after a first-round playoff exit in 2013 he dealt the pair to the Brooklyn Nets in an eight-player trade that netted Boston three future draft picks. The first of those was the No. 17 pick this past June, used on James Young. The Celtics still have first-round picks coming in 2016 and 2018 from the trade that keeps on giving.

It would have made sense for Ainge to seriously consider moving Rondo at any point in time from when Allen left to when the Brooklyn trade occurred, but he was reluctant to completely strip the Celtics down. That philosophy has been ridiculed in Philadelphia, but in keeping Rondo at least 18 months too long (probably two years too long) the point guard’s value dwindled.

There are three reasons why Ainge wasn’t able to get more than he did from the Dallas Mavericks -- Brandan Wright, Jae Crowder, Jameer Nelson and a future first- and second-round pick and a $12.9 million trade exception -- than he would had he moved Rondo sooner.

It hard to pinpoint exactly what Ainge could have gotten had he pulled the trigger on trading Rondo sooner. There were rumors that they could have traded for Isaiah Thomas, Ben McLemore and two first-round picks from the Sacramento Kings during last season, which would have represented a much better haul. If nothing else though, the Kings have been picking much higher than the Mavericks for quite some time and that figures to remain true over the short term.

You can’t fault Ainge solely on what was rumored to be on the table in the past, but it’s obvious that Rondo was less valuable on Thursday than he was several months ago. If you are interested in reviewing some of the chatter surrounding Rondo over the last seven years Mike Prada of SB Nation has compiled an excellent list of the 29 Rondo trade rumors that didn’t come true.

He has been mentioned in rumors so often throughout his career that when the Dallas whispers began on Wednesday afternoon there was almost a boy-who-cried-wolf reaction. Members of the media have a love/hate relationship with trade talk, but rumors can spark interest over the slog of an 82-game season. There wasn’t much “buzz” in the press room at the TD Garden in the hours before, during or after the Celtics beat the Orlando Magic.

Excuse us for thinking this was just an addition to a long line of dead-end speculation.

A rigid grade won’t be assigned to the Celtics, or the Mavericks for that matter, in this space. The more important thing is that Ainge can finally move forward and put together a concrete plan for the team’s future. Rondo’s pending free agency no longer hangs in the balance and signing him to a maximum contract in July is now out of the question (just ask Red Sox fans how trading a star and then “attempting” to re-sign him works out).

Ainge used the sixth overall pick in June to draft Marcus Smart, who will become the full-time starter with Rondo in the Western Conference. Ainge will have substantial time to assess whether or not Smart can be the team’s point guard of the future. It’s worth nothing that Smart has had injury woes of his own. He’ll have to stay on the court in order for a true evaluation to take place.

The Celtics won’t have any expectations over the remainder of the season, allowing for more experimentation and evaluation. It’s not as though Boston is lighting the league on fire at 9-14, but they had won five of eight prior to the trade.

Dealing Rondo officially opens up the Celtics for business through the Feb. 19 trade deadline. Jeff Green could be next, although initial reports indicate that Boston is in no rush to move him. He has a player option for next season at $9.2 million, which seemed much worse two years ago than it does currently.

Ainge would love to find a taker for Gerald Wallace’s contract, but that may take some black magic. Avery Bradley is the only other player on the roster with a concrete contract commitment past this season at more than $3.5 million. He signed a four-year, $32 million deal with the Celtics this past summer.

Smart and Young are only in their second full month as NBA players and Kelly Olynyk seems to have become a favorite of Stevens, but beyond those three no one on the roster should be untouchable. They have a host of young players on cheap contracts, which equates to good assets for the future or a trade.

Wright, who will earn a total of $5 million this season, will be a free agent. Crowder is making less than $1 million and Nelson has a player option for $3.25 million that could become a non-factor if he’s waived as has already been rumored. In addition to all the financial flexibility Ainge will have going forward, Boston now has nine first-round picks over the next four drafts.

Only time will tell if those picks are used properly. A perfect mix of trading and executing those selections would put the Celtics on the fast track back to the postseason.

Now that Ainge has finally let go of the past, the Celtics can begin an uninhibited rebuilding process. Rajon Rondo may have been part of the present for too long in Boston, but at least now we know he’s no longer the future.