Tim Frazier Fighting For Another Call-Up 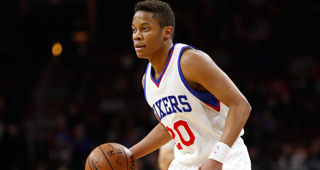 It was Military Night in Portland, Maine, as the hosting Maine Red Claws faced the Austin Spurs for a matchup between the top two teams in the D-League. When Maine took the floor, a smaller, 6-foot-1 point guard adjusted his awkwardly fitting camouflage jersey before giving high-fives to each member working on the sideline. He walked over to the free throw line, wiped the bottom of his shoes, and prepared for the D-League matchup.

And while the camouflage did its best to hide him, the man named Tim Frazier did everything but blend in.

Frazier finished the game with 22 points, 14 assists, and 13 rebounds in the win – notching a double-double with more than six minutes remaining in the third quarter and grabbing a rebound to complete the triple-double with four minutes left in the game. This was far from unusual, however, as it was Frazier’s fourth triple-double on the season.

“We marvel at the fact that this young man is still playing in the D-League,” color commentator Rick Simonds said on the YouTube broadcast after Frazier sunk two free throws late in the fourth quarter. “Because virtually every game he is at or near a triple-double.”

In addition to his four triple-doubles, Frazier has also been one rebound short of a triple-double on three separate occasions. So with three more rebounds, Frazier could have had seven triple-doubles in 30 D-League games this season. His contributions have been noticed, as Frazier is currently ranked as the fourth best D-League prospect by the league’s website.

With the way Frazier has been playing, he’s fighting his way towards another NBA opportunity.

Frazier was a hot commodity among quality academic programs out of Strake Jesuit High School in Houston, Texas and decided on Penn State over schools including San Diego, Santa Clara, Stanford, and TCU among others. Rivals.com ranked him as a three-star prospect and the 110th best in the country after Frazier led his team to the state semifinals as a senior.

Frazier played in all 31 games at Penn State as a freshman, but emerged as a starter in his sophomore season. He started in 33 of 34 games that season and ranked third in the Big Ten by averaging 5.5 assists per contest.

As a junior, Frazier really burst onto the scene. He averaged 19.6 points per game, ranking second in the Big Ten, in addition to a conference-best 5.6 assists and 2.4 steals per contest. Frazier became the first player at Penn State to be selected to the Big Ten All-Defensive team while he was named the John Lawther Team MVP.

Following his successful junior season, Frazier was named a preseason All-Big Ten selection and was on the Wooden Award Preseason Top 50 watch list. His season was cut short, however, as just four games into the year, Frazier ruptured his left Achilles tendon and needed surgery.

“It hurt for a while in the beginning, but I believe everything happens for a reason,” Frazier told RealGM. “I knew there’s a reason why I ruptured my Achilles and I had to sit out a year but that year I became a coach on the sideline and was able to see the game from a different point of view. I think it has benefited me and helped me become the man I am today.”

After applying for a medical hardship waiver, Frazier was granted a fifth season and broke the school record for career assists, finishing with 641 as a Lion. He led the conference in assists per game and finished as the seventh leading scorer in Penn State history. In addition to his stellar athletic career, he graduated with over a 3.1 GPA and was a four-time Academic All-Big Ten selection.

Despite a historic collegiate career, Frazier wasn’t considered a big-time NBA prospect. He went undrafted in the 2014 NBA Draft and was invited to play in the Las Vegas Summer League with the Philadelphia 76ers. He averaged 3.4 points, 4.0 rebounds, and 2.0 assists per game at the event and signed a training camp deal with the Boston Celtics.

While Frazier didn’t make the NBA team, he was acquired by the D-League affiliated Maine Red Claws. He said that he was able to learn from point guard Rajon Rondo during the training camp experience.

“Someone that I learned a lot from in camp was Rondo and the way he carried himself as a leader on the court – how he was able to see passes and see things before they happen,” said Frazier. “I try to benefit as much as I can from wherever I go, as far as gelling and asking as many questions as possible.”

The experience seemed to show in the D-League, as Frazier emerged as one of the league’s top point guard prospects. After averaging 15.9 points, 8.9 assists, 6.8 rebounds, and 2.0 steals per game midway through the season, Frazier was selected as a D-League All-Star in just his rookie year.

After earning the All-Star selection, Frazier got even better news the next day.

Frazier’s dream of playing in the NBA came true, as Philadelphia called him to play on a 10-day contract.

“I was excited, it was unreal,” said Frazier. “You work so hard…and to finally get a call that said, ‘You’re coming on up’ was pretty awesome. It was a dream come true to be able to put on a NBA uniform.”

The next day, Frazier’s journey came full circle. He donned a Philadelphia jersey while making his debut against the Boston Celtics. Frazier played 35 minutes, contributing five points, five rebounds, and a game-high 11 assists. The 76ers lost in a 107-96 defeat, but Frazier was impressive, especially considering his brief time with the organization.

“I was able to play my first game in Boston, somewhere I had been comfortable with and I knew the players on the team,” said Frazier. “I wouldn’t say I wasn’t nervous, but I just wanted to go out there and play my game and give it my all to try to help the 76ers get a win. It was easier for me because I was playing against guys I knew and playing in a gym that I had already played in before.”

Frazier started in the next two games before the All-Star break occurred and his contract expired. He played in the D-League All-Star game, scoring 11 points on a perfect 4-of-4 shooting while dishing a game-high 10 assists. Frazier played another game with Maine – finishing with 10 points, 13 assists, and 13 rebounds – before Philadelphia offered him another 10-day deal.

“I think that I had some improvement [with Philadelphia] and I know what it takes to make it into the NBA, so I’m looking forward to working on my game,” said Frazier.

Since returning from his time in Philadelphia, Frazier has played two games in Maine, which included his triple-double against Austin. He averaged 24.5 points, 15.0 assists, and 11.5 rebounds per game while shooting a combined 18-of-31 (58.1%) from the field. While Frazier has excelled, he recognizes that there’s still areas to improve.

“I want to win every game that we have and continue to get better,” said Frazier. “Personally, I want to continue to work on my game and become a better player as well as help the team win. The team goal is to win as many games as possible and put us in the best situation to win a championship.”

The biggest area where Frazier can improve is in his three-point shooting, as he’s made just 26.8% of his attempts from deep this season. But despite some weaknesses, Frazier will continue to work on all aspects of his game to become the best overall player he can be to prepare for another NBA opportunity.

He added, “A wise man once told me, ‘You can’t just always work on your weaknesses because your strengths will become your weakness later on.’ So I’ve been trying to work on everything from top to bottom.”

As Maine sits atop the D-League standings with a 25-11 record this season, Frazier will continue to be the exceptional floor general he has been with the Red Claws. He may not be there for long, however, as NBA teams looking for a true point guard could come calling. If an NBA organization is looking for an all-around contributor with an unselfish style and demeanor, Frazier is that guy.

“Whatever a team needs me to do, I’ll do it,” Frazier finished. “I’m a team-first guy and I believe that whatever is needed I can do it or whatever you need me to do, I can get it done.”

Until the opportunity comes, Frazier will be causing trouble in the D-League. With the way he’s been playing, he might mess around and earn another NBA Call-Up.