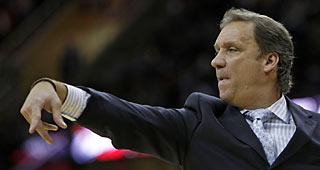 Sean Kilpatrick signed a 10-day contract with the Minnesota Timberwolves out of the D-League and here is a scouting report on his game:

Situation: With just seven healthy players available on Thursday, Minnesota needed a body within distance to play against the Knicks and was granted a hardship waiver to add a 16th player on the roster. Kilpatrick was given a 10-day contract and was inserted immediately into action, playing 10 NBA minutes after spending less than an hour with the team. He was a standout five-year player at Cincinnati before going undrafted in 2014. Kilpatrick spent the summer league with the Philadelphia 76ers before he was briefly signed by the Golden State Warriors with the intention of signing him to the D-League affiliated Santa Cruz Warriors. He was traded to the Delaware 87ers mid-season and has blossomed into a top D-League player.

Size/Athleticism: At 6-foot-4, Kilpatrick lacks ideal size for the NBA shooting guard position. He doesn’t have ideal length or athleticism to help compensate.

Ballhandling: Kilpatrick has shown some growth as a ballhandler, but he likely won’t spend time at the point guard position. He can play in the pick-and-roll but will probably see a smaller role in the NBA.

Penetration: Kilpatrick shows the ability to occasionally slash to the rim to compliment his jumper. He uses effective pump fakes or jab steps out of the triple threat position to get his defender off balance and attack the rim. Kilpatrick isn’t an excellent finisher, hitting 53.6% of his shots from within 8 feet, but shows the ability to keep defenders off balance. He’s at his best pulling up from mid-range rather than taking on rim protectors.

Passing: Averaging 1.9 assists per game, Kilpatrick shows the ability to occasionally set up a teammate. He isn’t a playmaking guard but the ball doesn’t stick in his hands.

Defense: Kilpatrick lacks the physical tools to be an elite defender. His toughness allows him to compete on this end, but he may struggle against NBA athletes due to his lack of size and lateral quickness.

Rebounding: Kilpatrick chips in 3.3 rebounds per contest. He isn’t a consistent threat on the glass, but can add an occasional rebound.

Versatility: While Kilpatrick could possibly spend some time at the point guard spot, his ideal position is as a shooting guard. He'll be at his playing off of kick-outs.

Final Analysis: Kilpatrick is a productive guard that has been effective at every level. He may not have ideal size, but Kilpatrick is an efficient shooter that can score from mid-range or behind the arc. While he may have been a quick addition, Kilpatrick could use the opportunity to make an impression on the organization.