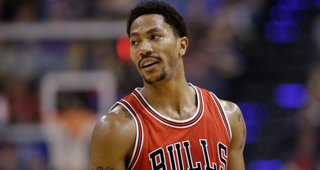 CHICAGO -- On the way out of Joakim Noah’s clutch, childhood friends grabbed Derrick Rose inside the United Center and one tapped him twice on the head. His brothers and old high school teammates, including Tim Flowers, reassured Rose: You’re the man here.

Less than 10 feet away stood the only other man in Rose’s locker room, Jimmy Butler, with a similar ferociousness in mind and game, percolating an equal mentality to dominate. Long before the season started, everyone around these Chicago Bulls understood something clicked within Butler. If there’s someone here who feels more worthy than Rose for game-defining shots, it’s Butler. If there’s someone so quiet publicly about wanting superstardom, yet cherishing this new career chase, it’s Jimmy Butler.

So before Rose banked in one of the most pivotal shots of his career -- a fadeaway three-pointer to give him 30 points and the Bulls a 99-96 victory in Game 3 against the Cleveland Cavaliers on Friday -- his unrelenting, unafraid backcourt partner hounded LeBron James, drained clutch shots even as his legs felt heavy all night and served as the perfect two-way player next to a former most valuable player. There were the 20 points, nine in the final eight minutes, and eight rebounds, five steals and two assists out of Butler.

Somehow, the Bulls had allowed Cleveland to tie the game at 96 late Friday on a three-pointer by J.R. Smith. When Tom Thibodeau called timeout for one final play with three seconds, he had drawn a set for Butler. Only, James wouldn’t let Butler run to his spot without locking step for step, and so the Bulls scrambled.

“It was a broken play at the end,” Rose said.

Rose left David Blatt as one of the last Cavaliers off the court, and Blatt couldn’t fathom that Rose had hit a three-pointer off the glass. Not from Rose’s angle, his distance and body contortion. In truth, Butler badly wanted that last shot, but he was willing to praise a teammate’s courage -- as desperate a shot as Rose attempted for the Bulls’ 2-1 series lead.

“I’m glad Derrick has the faith in himself,” Butler said.

Butler has long kept the faith in himself, a remarkable story as a junior college player to an NBA All-Star and a Most Improved Award winner. Over the summer in Houston, he locked himself and those close to him, committed to weeks away from the outside world. The gym served as Butler’s television, and the basketball as his cell phone. Butler was multi-tasking now, developing range, defensive movements and a self confidence. He had a major contract extension in mind, a rise no one foresaw outside of the organization and his support circle.

Weeks went by in the summer, and Butler absorbed the vastness of his improvement. It nurtured an inner conviction and an outward demonstration that, yes, the grind is paying off. At the professional level, player often say the biggest leaps are made in the offseason, and Butler defines this. The work was put in, and so Butler has shown a distinct trustworthiness, a sometimes demonstrative disposition.

“Give me the damn ball,” Butler tells his coaching staff.

For Butler, a former teammate in Luol Deng had been a mentor and an utmost case in professionalism and pro mindset. As a rookie in 2011, Butler would hear stories from Deng about playing 40 minutes for significant stretches of a season, and they’d exchange workout tips.

Through it all, Rose always needed another dominant personality next to him, a teammate as eager and capable in moments of truth. In so many ways, Ben Gordon was just that when Rose won Rookie of the Year in 2009; only inches shorter than Butler and even lower on a defensive scale. For Rose, Deng and Carlos Boozer were a bridge to Butler and Pau Gasol.

The Cavaliers will have a sharp urgency in Game 4, and the ability of James to maintain calm after playoff defeats has heightened his ferocity for resurgent games. With Butler as his shadow, James missed 17 of his 25 shots and had seven turnovers. Butler tangled his hands for so many deflections and knock aways, and off the bench, Nikola Mirotic stretched the defense for 12 points and one three-pointer, cementing himself in Thibodeau’s rotation moving forward.

Four years ago, here was a 22-year-old Butler buried in the head coach’s rotation, seen as a defensive specialist. He is now culpable in all facets of the game, accepting and seeking responsibility.

Outside of Chicago, teams are already preparing possible maximum-salary offer sheets for Butler in free agency, including the Los Angeles Lakers as one of several expected suitors, league sources told RealGM. Even Butler’s college area connection, the Milwaukee Bucks, will have cap space in July. Around the league, there’s a question: How will Chicago handle the inevitable max out of a star player not named Rose?

For now, Butler has made clear his desire, and the Bulls will assuredly match anything, anyway. Here’s a breakthrough star in the regular season, and an even bigger performer in the postseason. He’s a main reason these Bulls believe they have an opportunity to defeat LeBron, but James has been persistent in his bounce-back outputs ever since those 2011 Finals.

Back then, Rose presided over the ball, presided over these Bulls everywhere. All along the need for a co-star illuminated the mind of the front office, and perhaps Rose himself. Tom Thibodeau never did get the ball into the hands of his designated scorer for the final play on Friday. His shooting guard wanted it. He’s worked over his body and mind, and the process has given Jimmy Butler a level of belief no one has shown so forcefully playing next to Derrick Rose.