Grading The Deal: Jordan Clarkson Re-Signs With Lakers For $50M 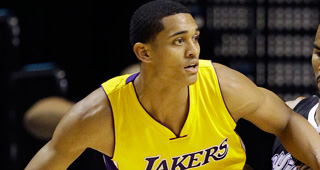 The Los Angeles Lakers drafted Jordan Clarkson 46th overall in 2014, gave him a significant opportunity on a rebuilding team also seeing out the final days of Kobe Bryant’s career and he proved himself a starting quality shooting guard. The second round of the NBA draft is speedy and disorienting while feeling inconsequential but success stories like Clarkson and the Lakers certainly justifies the exercise.

Clarkson and the Lakers agreed upon a four-year, $50 million deal. At an annual average of $12.5 million, Clarkson will be paid a little bit below the average salary for a starter under the new cap.

Clarkson played a lot of minutes at point guard out of necessity and his general versatility, but he should settle in permanently on the wing. Clarkson has promise on the perimeter as a shooter, hitting 34.7 percent of his 320 attempts this past season despite hitting just 29.5 percent of his corner attempts. With D’Angelo Russell and Clarkson in the backcourt, the Lakers have a pair of young guards that can shoot it well from the perimeter and make plays off the bounce.

Clarkson scored just 0.60 points per possession on isolations, one of the worst marks in the NBA amongst players with more than 100 attempts. As with many aspects of the Lakers these past two seasons, it is difficult to determine if this is a simple limitation of Clarkson’s game or if the spacing of their offense contributed to this mark. The eye test would suggest Clarkson can be a better isolation scorer than that, though it is unlikely to be a big part of Luke Walton’s offense regardless.

Clarkson has the athleticism and size versatility to be a good defensive player against both shooting guards and point guards. Similar to the way Klay Thompson defends high quality point guards to free up Stephen Curry, Walton can have Clarkson take the tougher defensive assignment of either guard away from Russell.

Clarkson was subject to the Gilbert Arenas provision, which could have allowed him to sign a heavily backloaded deal and that could have proven beneficial to the Lakers in keeping his cap number low for 2017. Clarkson

Grade for Lakers: A-

Clarkson received a big opportunity with the Lakers and seemed to enjoy playing in the city amid a possible high profile celebrity relationship.

Clarkson and the Lakers could have engaged in a prolonged stalemate as they waited for a team to offer him that Arenas provision contract in restricted free agency, but they instead moved quickly on a deal for $8 million less than he could have signed.

The Rockets signed both Jeremy Lin and Omer Asik to this type of deal in 2012 and it essentially hurt all parties since their incumbent teams let them go and they were traded away before Year 3. The situation would have been different for the Lakers as they would have matched, but this agreement allows them to structure the contract to their choosing even if it could have helped them to backload it.

Grade for Jordan Clarkson: A