Jimmy Butler Is About To Be Insufferable 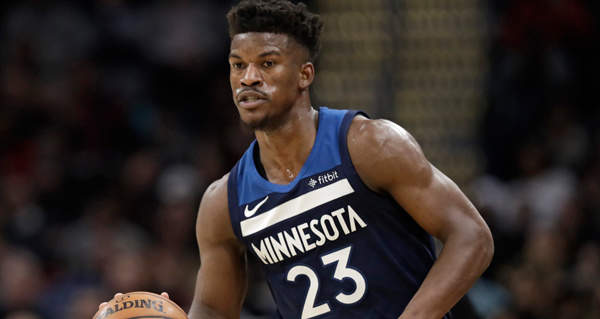 I imagine that Jimmy Butler doesn’t spend a whole lot of time thinking about whether or not he’s a “leader” or even a “good teammate.” His relatively unwavering track record from his eight years in the NBA implies, “If you’re not willing to do what I’m willing to do to prove I’m better than whoever is in front of me, then what’s even the point?”

It’s a confusing time for fans to process the increased agency of NBA players. Hating Anthony Davis for simply requesting a trade is preposterous, and the fourth quarters he spends on the bench are decisions of asset protection by the Pelicans as much as they are anything else. But still, it’s not unreasonable for a New Orleans fan to consider the fact that Davis gets paid about $75,000 during a fourth quarter and they paid a high bill to attend the game. Preferably he would be on the court doing the things he is very good at.

So without making any judgment about how to handle these situations, it’s hard not to respect Butler’s trade request from Minnesota to start the season in which he basically declared, “Oh, I’ll play. No question about it. Put me in, Coach. I’m just going to be an enormous asshole about the whole thing.” Who among us wouldn't love to have such gall with our own workplace grievances?

See, to Butler, Karl-Anthony Towns and Andrew Wiggins were soft. Whether or not that’s a true or fair characterization (it’s probably a little unfair), it will always be true to him according to the simple fact that they didn’t make it a priority to prove to him otherwise, as he would have done to anyone that applied such a designation to him. At the time, there was a lot of talk about how Butler shouldn’t be acting like Kobe when he’s definitely not Kobe. But I never heard a good response to “why not?” It’s worth noting that Kobe wouldn’t have been Kobe if he didn’t believe he was good enough to act like Michael Jordan, even though he objectively was not as good as Michael Jordan.

Butler would probably tell you that he’s never needed to be The Man, he just wasn’t about to cede that role to someone who he knew he could punk on a random Tuesday morning practice without being late for lunch.

The gap in talent between Embiid and Towns is noteworthy, but likely not all that significant to a guy like Butler. Even the biggest Towns apologist (of which I rank relatively high), has to admit that Butler’s direct challenge of him in practice (reportedly: “He can’t do sh*t against me!”), would not have resulted in a pass had it been issued to Embiid. More likely, it would have resulted in a dunk and an Instagram post calling Butler a virgin or something equally childish and/or hilarious.

Embiid’s dominance and persona is of a very specific brand: Confident and unbothered. It was especially on display in a January 31st victory over the Warriors in Oakland. As silly and dramatic as it sounds, the Warriors are an intimidating team. To make Steph Curry angry risks bringing about an essentially impossible-to-stop offensive performance. The same can be said for Kevin Durant. To make Draymond Green angry means having to listen to him make you miserable as they beat you, which they almost certainly will. That night, Embiid was defiantly unfazed by the whole dynamic. The only other player I can remember being so visibly and outwardly not intimidated by the Warriors is Lebron James. But James’ defiance is much more theatrical; a sort of declaration that The King cannot be shaken. Embiid just wants the world to know that he finds the idea of being intimidated by the Warriors legitimately funny. He tussled with DeMarcus Cousins, had words for each one of their superstars (and the crowd), and went for 26 points, 20 rebounds, and five assists.

This is the kind of behavior in a teammate that puts an involuntary and borderline-sinister smile on the face of a guy like Jimmy Butler, who only scored seven points in that victory but ripped the ball from Durant, who tried to post him up in the final minutes of the game. Butler’s tough-guy aesthetic is a bit much on the level of a big-picture, personal narrative. Where it belongs is in the fourth quarter of a playoff game when he’s matched up with a more naturally talented player. As self-promotional as his whole shtick may be, it’s hard to doubt that he genuinely does enjoy humiliating basketball players for the crime of not being up for the challenge he presents them with.

There’s an element of him that would gladly take four T.J. McConnells into the playoffs and go down in the most anarchic sweep in NBA history. Before a Monday matchup with the Mavericks, Brett Brown talked about playing Embiid and Ben Simmons together more as opposed to staggering their minutes. “Jimmy is completely reaping the benefit of being the guy with the ball, more than not, in the other group,” he said.

Butler’s dramatically performative competitiveness could reasonably be characterized as grating or distracting. He’s the type of player would love to say, “Talk to me when you have a championship,” only he also doesn’t have a championship. When you really break it down, though, that behavior is probably only grating to someone who isn’t all that competitive. And in the playoffs what else are you supposed to be? Simmons and Embiid are young, brash and talented enough to beat anyone.

Simmons, Tobias Harris, and especially Embiid will all carry the Sixers with All-Star level skillsets. But Butler’s the one who’d like you to believe that whatever part of your psyche you’re willing to go to in order to win, he’ll go one step further. He’s arguably as tough as he wants you to believe he is. Those types of players win possessions. They win quarters. They swing a playoff series.

Butler is willing to look like a fool for the way he carries himself in the event that he doesn’t deliver, all in the name of some tough guy glory. Anyone on Twitter can call it a shtick, and they might not be wrong. But he’s exactly where he wants to be: competing for a championship with some like-minded players.