The Potential Of Zion Williamson Vs. The Draft's Inherent Uncertainty 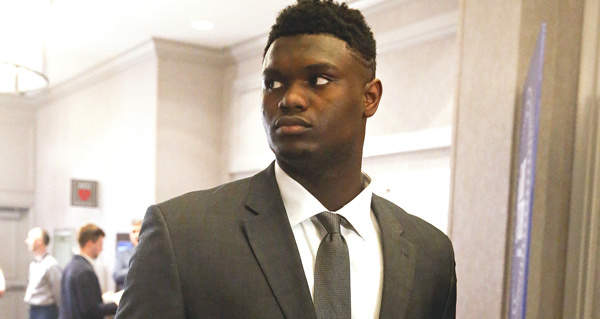 Most of the talk surrounding Thursday’s NBA Draft is inherently theoretical. It’s all about projection, taking a player’s achievements from college or other pro leagues and trying to ascertain how they will translate into the NBA. Some players who look great at lower levels lack particular skills that would make them viable selections, while others whose numbers are less spectacular are somehow perfect for the NBA. It’s a bit of a crapshoot where potential often outweighs achievements and athleticism is too frequently prized over actual skill. Yet in spite of this, in spite of the fact that there can be no real way of evaluating a team’s selections with any concreteness until the draft is long since passed and several seasons have gone by, certainty and consensus nevertheless arises.

Zion Williamson entered last season as a considerably renowned prospect with his viral highlights, but wasn't considered the best prospect in his class. ESPN had Williamson at No. 7 exactly one year ago, behind both of his Duke teammates, Nassir Little, Sekou Doumbouya, Romeo Langford and even Quentin Grimes. But over the course of his lone collegiate season, Williamson developed into something much more as he dominated Duke’s opponents game after game. He averaged over 22 points per game on an absurd 68 percent field goal percentage, showcasing a sublime combination of power and grace that is, if not entirely unprecedented, extremely rare. He was also a hound on the defensive end, averaging almost a combined four blocks and steals per game while putting up an unbelievable PER of over 40, which I honestly did not know was mathematically possible.

Accordingly, in light of his phenomenal freshman season, Zion is considered the closest thing to a can’t miss prospect in many years. Just in the last half-decade, Andrew Wiggins, Ben Simmons and Markelle Fultz were unanimously considered to be the number one pick, but none of them were spoken about in the same breathless tones that Zion is. Not since at least Anthony Davis in 2012, or perhaps even LeBron James in 2003 has a player been spoken of so rapturously, like they contain the ability to singlehandedly alter the destiny of not only the franchise lucky enough to elect them, but of the NBA as a whole. Of course, the way the careers of Wiggins and Fultz have gone so far should give general managers at least some pause about the value of consensus here.

With the Pelicans winning the rights to draft Williamson first overall, along with their agreement to trade Anthony Davis to the Lakers, Williamson will immediately carry the mantle of a franchise on his back. While the Pelicans certainly hope Lonzo Ball and Brandon Ingram develop into the players they were expected to be upon their own entrance into the league a few years back, already there is a hesitancy to expect too much from them. Zion has not had the chance to let anyone down yet, to struggle with injuries or his three-point shot as both Ball and Ingram have already in their short careers, so it’s easier to invest all the team’s hopes in him. In this liminal space he occupies between his time at Duke and the official start of his NBA career, he can be expected to do anything, to fulfill everyone's wildest expectations. There’s no possible way for anyone’s hype to be misplaced, at least not yet.

In this way, Zion is more of a myth than a man at this point, more potential than actuality. There is game tape to watch now, and statistics to break down, but from there, one can fill in the gaps however one sees fit. One can imagine him playing on a team with better spacing than Duke had, with coaching more suited to making the most of his skill set and extrapolate from there, making him into even more than he already is. Such thoughts aren’t entirely fueled by imagination, though in the absence of any NBA experience, it plays no small role.

It’s easy to get caught up in hype. It’s fun to believe in the imminence of greatness, that the next revolution is right around the corner. And in the case of Zion, there’s no reason at all to root against him. He is a delight to watch, effortlessly performing feats that would be amazing for anyone, let alone someone with his body type which is like if Charles Barkley were taller, larger, and also absolutely jacked, though as that description shows, any comparison between him and other stars is going to come with a few caveats. He also seems eminently likable and charming, all while playing with a motor that is Russell Westbrook-esque but without the rash decision making. When you watch his highlights, he does the seemingly impossible play after play. You think, surely he can’t recover defensively and get that block, and then he does. You think, surely he can’t maneuver around his defender for an effortless dunk and yet that’s exactly what happens. It may just be a case of a superior athlete feasting on lower level competition, but then again, no other college player has so thoroughly outplayed their peers in recent seasons.

If Zion can meet the expectations placed upon him then the Pelicans should be in a very good place moving forward. However, if he fails to, the sad part is that it will not be the scouts and analysts who placed those expectations on him who will receive scorn, but Zion himself. One of the strange things about the draft in recent years is that, even as executives have access to more film and information than ever before, the selection process has not become any more foolproof than it has in the past. It certainly feels a bit foolish to bet against him in light of his transcendent abilities and unprecedented style, though if the history of the NBA draft has any lesson to offer it may be that believing in any player so confidently is a bit of a fool’s errand. Of course if the scouts and analysts are correct, then Zion is so exceptional, so great that the uncertainty inherent to the Draft is irrelevant here. For the sake of a Pelicans franchise in need of stability, and a league that can never have enough star power, I’m hoping they are right.