The Solitude Of Russell Westbrook 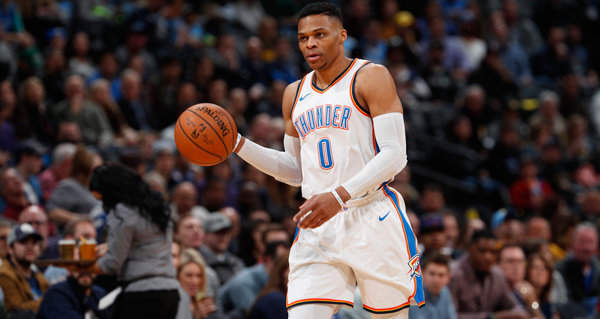 There’s a fine line between self-confidence and delusion. Cliche as it may be to say so, it’s important to believe in yourself, to think that you are capable of success in your pursuits for otherwise, you are likely to fail before you even begin. However, a confidence that cannot be undercut no matter what happens, that is not really open to criticism can, in the long run, be just as harmful as pervasive self-doubt. One’s worst impulses are then allowed to run wild, growing like weeds in a garden that would benefit from some prudent pruning. And the problem with that is, eventually, the weeds become intractable and even more difficult to remove than they would have been if these negative traits had been just thoughtfully addressed in the first place.

Of course, it obviously takes a certain amount of pride to become an NBA player, to play a game played by hundreds of millions worldwide and believe that you have the potential to become one of the few hundred best in the world at it. Though some obviously go a bit further, having a confidence that outstrips their actual abilities. It’s perhaps unfair to place him among those players’ company, though of all the players currently in the NBA, I’m not sure there’s any other who is as sure of themselves as Russell Westbrook -- or at least none whose sureness impacts the way they play as much. Numbers and empirical data play seemingly no role at all in his style of play. He is the id personified as a basketball player, recklessly attacking the defense possession after possession with an energy that often borders on fury, hoping that he can overwhelm opponents through passion and athleticism alone. It often works, but when it doesn’t, the failures are that much more notable for how outsized and theatrical they are. Rarely has a superstar player had to be defended with so many caveats.

It is impossible to pick out the prototypical Russell Westbrook game. For a player whose style is so defined by both booms and busts, you have to pick at least two, or at least a single one where both boom and bust sit alongside each other, always threatening the other. To focus on only the highlights gives a distorted view of his allure and to hone in on the negative is a disservice to what makes him so special. Just last season, there was the twenty-two point loss to Golden State where he only scored seven points on 2-16 shooting alongside his phenomenal 20-20-21 performance against the Lakers — a feat that only Wilt Chamberlain had previously accomplished. The pendulum just swings so far and so fast.

The thing with Russell Westbrook is that the very things that make him so lethal are the very things that undo him. He outplays opponents through force of will, through a belief that he is better than them (and his teammates), and more often than not, he has the skills and athleticism to back up this outsized faith in self. The problem is, well, obviously, the times it does not work out that way. If he has missed six consecutive three-pointers, the lesson he takes from that is not that he is taking a bunch of shots he would be better off not taking, but that he is due to make the next one.

Following Paul George’s trade to the Clippers this weekend, Westbrook’s future is in limbo. For the first time in his career, he is being floated as a potential trade piece as the Thunder decide whether or not to pursue a full rebuild. With Westbrook, the team is poised to remain competitive, but their best case scenario seems to be favorable playoff seeding that could give them a potential Conference Finals trip similar to what happened with the Trail Blazers this past season. Westbrook raises the floor of any team he plays for, but his presence also seems to place a cap on how good they can be at this point in his career. He is so domineering, so omnivorous as a player that he plays an outsized role in determining his team’s fate even if he is not their best player.

This is not the first time he has been left alone, the lone star in Oklahoma City. Three years ago, Durant left and Westbrook played as he always had — full of fury, relentless in his pursuit of doing all things at once — but with no co-star to temper him, he became the first player to average a triple-double in a season since Oscar Robertson fifty-five years ago, winning MVP in the process. In light of those individual achievements, the fact that the Thunder were ignominiously defeated by the Rockets in the first round of the playoffs -- giving credence to those who argued James Harden was the rightful MVP -- felt almost besides the point, but not entirely. It seems silly to say that Westbrook does not want to win, that the energy he expends every night is devoted to some other end apart from victory, though one cannot help but ask is he simply unable to imagine a path to winning that does not flow directly through his hands?

Westbrook has long been one of my favorite players in the NBA. I remember when the Thunder were just beginning to show signs of the league power they would soon blossom into and Westbrook was the spark, the gloriously unpredictable player who would often snatch victory from Oklahoma City’s opponents alongside the far more steady, though equally lethal, Kevin Durant and James Harden. Defending Westbrook against his detractors felt almost ideological, opting for dynamism and freedom and the possibility of surprise over predictability and order. It felt like Durant and Westbrook needed each other, though once Durant left and won two championships and two Finals MVPs in Oakland, it became clear who benefited most from their unsteady partnership. It was easier to defend Westbrook then, and more fun too. Now, almost a decade after Durant and Westbrook made the playoffs for the first time, giving the eventual champion Lakers quite a first-round scare, even Westbrook’s biggest fans and defenders, myself included, are forced to concede that his fiercest critics may have had a bit of a point all along.

Even after winning the MVP in 2017, just exactly how valuable Westbrook is feels like a bit of an unsettled, perhaps unanswerable question. To prize Westbrook is to place a premium on passion, but also on volatility and unpredictability. How can a player who has been the model of consistency in one sense, averaging a triple double for three consecutive seasons, also be so, well, inconsistent? Westbrook is again at a turning point for his career, though now what happens next appears to be largely out of his hands. He may or not be traded, but regardless of what happens next, it feels sure that he will play as he always has even as his athleticism slowly begins to fade and the shots that were already unlikely to fail become even more perilous prospects. It is often said that no man is an island, unaffected by the world outside them; Russell Westbrook, though, in his single-minded pursuit of whatever it is that drives him, seems intent on proving everyone who believes this truism wrong, playing as he always has, consequences be damned.