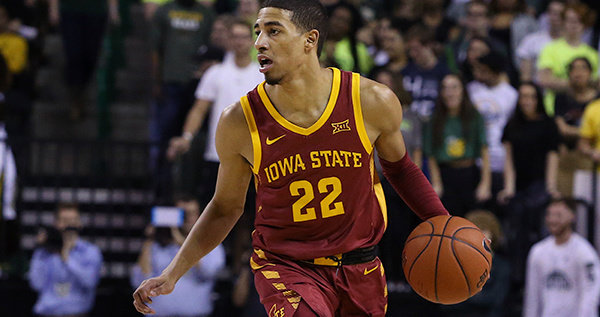 I think it’s fair to say that Tyrese Haliburton’s rise has been somewhat meteoric.

Besides being ranked 172nd in the 2018 high school class [1], the six-foot-five lead guard also had a fairly quiet first year at Iowa State last season – averaging just 8.2 points per 40 minutes on a staggeringly low 9.1% usage rate, though while posting 66.6% true shooting and turning the ball over just 28 times in 35 appearances.

Haliburton then made the United States team sent to Crete, Greece to compete at the U19 World Cup last summer and excelled as one of the top shot creators on the team, earning All-Tournament honors at the end.

His percentages were as efficient against that level of competition as they were in his first year of collegiate basketball, with the 19-year-old leading the tournament in offensive rating and effective field goal percentage while turning the ball over just eight times in 174 minutes.

Back to Iowa State for his sophomore season, Haliburton was expected to take on a more prominent role within the offense as a sophomore and that has turned out to be the case so far, though it’s also fair to point out that his average of 17.2 points per 40 minutes on 13.2 field goal attempts per 40 minutes and his 20.9% usage rate are still short of what is usually associated with a guard projected to end up a top 10 pick, as he is currently ranked fifth on ESPN’s top 100, at the time of writing.

Maybe his rise to stardom says more about the general perception of a lack of superstar potential in this class or maybe the NBA is starting to adjust its view on what types of players it is looking for in the draft. If Haliburton does end up getting drafted ahead of guys like Cole Anthony and Tyrese Maxey, which are more in line with the types of lead guards the league has most often sought at the top of the order in the recent past, it might signal a potential shift in priorities.

That’s the case because Haliburton is not a volume scorer or an imposing physical presence. He doesn’t get to the rim a whole lot and earns very few free throws too.

What he brings to the table at this point of his development is intelligent execution within the flow of the offense, profiling as a caretaker point guard who can accommodate a ball dominant wing by being able to nail open shots, despite his unorthodox release, and create for others off a live dribble.

What that means is that Haliburton is likely to look better, or make more of an impact, when surrounded by better players. That’s obviously true for every player, but I’d argue it’s of particular importance for good “team players” like Haliburton.

But on a team with mediocre talent around him, he is probably unlikely to be viewed as a driver of success because he is not perceived as the sort of threat to score 30 that defenses fear the most. Considering that and the fact that he plays on a team that has lost nine out of 17 games so far, it would seem perhaps unlikely that his value would be properly matched with such a high investment. That’s why a potential top 10 selection would be somewhat surprising, historically speaking.

On the other end, Haliburton is pretty tenacious heating up the opposing ball handler and has shown a knack for creating events, not just reaching around for strips or jumping passing but even picking up a block quite regularly.

But despite his height, he doesn’t offer a lot of versatility as a defender yet because of his thin 175-pound frame, which probably restricts him to being viewed as more of a one-position defender at this point of his physical development.

The Oshkosh, Wisconsin native has more shot creation responsibility than he did last season but still spends an unexpected amount of time as an off guard in order to accommodate Prentiss Nixon and Rasir Bolton – two smaller guards with whom he regularly shares the court with.

Haliburton gets little elevation off the ground as a near-standstill shooter and launches what looks like a set shot at times. He used to get the ball out almost from the side of his head but now does it from in front of his face. Given his unusual bring-up motion and the low point of his release, he doesn’t dip for rhythm and has proven himself able of getting the ball out fairly quickly.

His shooting motion is not what many would call natural but it’s become more fluid and less mechanic than it was even in the summer and, besides the basic spot-ups, Haliburton has even flashed some ability to get shots off on the move – relocating off a passing sequence initiated by a drive of his, around the wing off roll-and-replace, to the ball for handoffs and off a pindown screen.

These tougher looks don’t go in a whole lot yet, but he is doing very well as an open-shot shooter – nailing 38.8% of his 98 three-point shots this season, at a pace of 6.7 such attempts per 40 minutes, after hitting 43.4% on 113 long-range bombs as a freshman.

Haliburton has also hit 73.2% of his 56 foul shots in his collegiate career to date, signaling his touch seems to be above suspicion.

His pull-up shooting ability is a little more unproven.

He’s nailed just seven unassisted three-pointers this season and isn’t as adept at rising off the bounce as he is off the catch at this point of his development, especially in terms of cutting a drive short and elevating with suddenness.

Haliburton has shown glimpses of a nifty handle taking his man one-on-one but doesn’t have an explosive first step, a whole lot of speed with the ball or side-to-side quickness to shake his defender off balance.

As is, he is more capable operating out of the pick-and-roll. Haliburton can pull-up from long-range if the on-ball defender goes under the pick and doesn’t recover in time to discourage him from working his way into his unorthodox release.

Against more capable point-of-attack defense, Haliburton has exceled at maneuvering his way around the ball-screen and inducing rotations while being economic with his dribbles.

He’s shown good feel for rejecting the pick or making use of re-screens and a knack for playing with pace while mixing in hesitation moves or changing speeds to engage the big man defender.

Haliburton has proven himself a good scorer from the in-between area, launching runners with good touch or leveraging his length into extended finishes around rim protectors keeping him from getting all the way to the basket – converting 45.7% of 46 two-point attempts away from the rim.

He’s also impressed with his court vision on crosscourt passes against the momentum of his body or jump-passes to the opposite corner and the timing of his delivers on pocket passes – assisting on 37.7% of Iowa State’s scores when he’s been on the floor this season. His turnover rate is not as remarkable as it used to be, due to the increased role operating off the dribble, but his 2.8 assist-to-turnover remains elite in this draft class, ranking first among players on ESPN’s top 100.

That said, Haliburton does not look to turn the corner decisively all that often and doesn’t pressure the rim a whole lot. Part of the problem is Iowa State’s lack of good shooting capable of opening up some clearer driving lanes for him but part of it is his athletic limitations in terms of speed, quickness and strength to withstand contact. He’s taken just 25.4% of his live-ball attempts at the rim and earned just 30 foul shots in 583 minutes this season. Not many of his assists have come after he touched the paint either.

Haliburton has, however, finished well at the basket the few times he’s gotten there – converting 73.5% of his looks at the rim, even if at a pace of just 1.6 unassisted makes per 40 minutes. He’s shown glimpses of power elevating strong off one foot if left unchallenged and flexibility to adjust his body in the air among the trees in the U19 World Cup, though he’s yet to prove he’s adept at using his left hand in these instances.

Haliburton has been asked to defend both on and off the ball at various times.

While defending shooters sprinting around the floor, his thin frame works in his favor as he chases around staggered screens quickly and his hustle to bother or even block a shot from behind is impressive.

In standard off ball defense, Haliburton is often active and leverages his speculated seven-foot wingspan into making plays in the passing lanes with deflections or steals (2.7 steals per 40 minutes this season), though he is prone to getting caught ball-watching on occasion.

He is attentive to his responsibilities rotating in to pick up the roll man and, besides getting his hands on pocket passes, has even flashed some bounce to disrupt a lob or block a shot with some regularity (39 blocks in 51 collegiate appearances and five blocks in seven appearances at the U19 World Cup).

His closeouts back to the three-point are urgent enough, though his best way of running the shooter off his shot tends to be selling out and opening up the gate.

Haliburton has also pitched in about as well as he can on the glass – collecting 13.3% of opponents’ misses when he’s been on the floor this season and mixing it up on scrums or attempting to helps the helper with a boxout, though his lack of physicality often results in him just getting pushed out of the way.

His defense is a lot more so-so on the ball.

He bends his knees to get down in a stance, ices ball-screens on the side of the floor, can get skinny cleanly while navigating over picks at the point of attack and puts in the effort to contest or block a shot from behind with decent effectiveness.

Haliburton has even switched on occasion and even shown some tenacity trying to front the post but lacks any sort of physicality to be put in that position often, though that sort of fight can sometimes be enough to deny a post entry to a lazy big who doesn’t feel like getting physical to push him out of the way.

But it’s in isolation where there is some reason for skepticism. Haliburton has gotten shook by shiftier types a fair amount, which is discouraging considering he projects as an on-ball defender who is supposed to check point guards on a nightly basis in the pros.

And when he’s managed not to get beat in the first step, he’s shown several lateral slides to stay attached and a knack to reach around for steals from time-to-time but also a lack of strength to chest up and contain dribble penetration through contact.