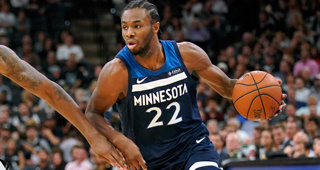 An executive suite scorched by fluorescent light. Gray carpets, uncomfortable chairs. Glen Taylor is going to give Andrew Wiggins what he wants, he doesn’t really have a choice, but he’s trying to at least construct the illusion that they’re equal parties in this negotiation. “I’m already extending to [Andrew] that I’m willing to meet the max,” he’d told the press a couple months previous. “But there are some things I need out of him, and that is the commitment to be a better player than you are today.” He says something like this now to Wiggins, who’s sitting up straight in one of the uncomfortable chairs, trying to seem receptive to the ancient man’s ideas. He’s wearing a suit custom-made for this meeting. Make me look like a self-hating accountant, he told his tailor. Pale yellow shirt, a too-long tie tiled with little brown rhombuses.

How’re things supposed to unfold from here? Wiggins says that actually, he doesn’t plan on working hard or improving his game, and would prefer to be paid less? Of course not. He more or less repeats Taylor’s words back to him, in answer form. He shakes the guy’s hand. There’s a lot of meaningful looking-straight-in-the-eye going on. What was always going to happen, happens. Wiggins signs his extension: five years, $147 million. Some people feel better about it than others.

This is October of 2017. One of the uneasy parties is Tom Thibodeau. Before the Wolves committed to Wiggins long-term, Thibs had wanted to include the lanky Canadian in the Jimmy Butler trade instead of Zach LaVine. This wasn’t so much an endorsement of LaVine—a defense-agnostic gunner rehabbing a torn ACL—as a vote of no confidence on Wiggins. Thibs was overruled by Taylor and LaVine was shipped to Chicago. The Butler deal turned out to be a disaster, with Jimmy going from Excited About The Project to Burning The Practice Facility To The Ground in the space of 15 months, but Thibodeau’s instincts were proven correct. It’s still not entirely clear what LaVine is, but he has made something of himself with the Bulls. Less than two-and-a-half years after speaking with Taylor and signing his mega-extension, Andrew Wiggins is one of the least desirable players in the NBA.

A big part of that is his salary, but it’s also the fact that watching him is a uniquely discouraging experience. He’s like a fighter jet made out of styrofoam. Great leaper, but not terribly inventive around the rim. Quick for his size, but lacking the requisite handle to capitalize on it consistently. He gets buckets only because he’s given ample opportunity to do so. There’s nothing special about his playmaking ability, so he’s ill-suited for a point forward role, and his shooting stroke is unreliable, so he doesn’t space the floor particularly well as a spot-up option. Defensively, he’s slightly better than terrible.

More than that, there is an overwhelming sense that Wiggins dosen’t get it. Like, he’s not doing all the little things well and coming up just short on the big stuff. He doesn’t have a keen feel for the game; he’s not doing anything that’s beyond the box score’s descriptive powers. Stars—even minor ones like, say, Donovan Mitchell—radiate a sense of control. They have good performances and poor ones but always assert a kind of dominion over the flow of the action. Donovan Mitchell gets the ball at the top of the key, and he’s orchestrating the moment, trying to arrange reality into a shape that suits him. Wiggins is simply trying not to drown. He could score five times in a row and it wouldn’t seem like he was going to convert his sixth attempt.

A creative coach might be able to figure out a way to deploy him that emphasizes his thin and peculiar strengths, but it says something that the Wolves were recently able to move Robert Covington for some youngish talent and a first-rounder while Wiggins singlehandedly held up a deal between the Warriors and Wolves for D’Angelo Russell. Golden State spent the past few days pondering whether they truly want to take on such a large contract for a player who, five-plus seasons into his career, remains largely theoretical.

Covington doesn’t have Wiggins’s gifts, but his utility is obvious: he can defend multiple positions and hit open threes. To want Wiggins, or even talk yourself into him, you have to imagine what he could become—what are two or three specific things he could eventually get quite good at? That’s a lot of work to put in for somebody who’s already being paid like a star. The Warriors pegged the cost of labor, plus an above-average combo guard they acquired last summer solely for the purpose of trading him away, at a protected first-rounder and a future second. And the consensus seems to be that Golden State didn’t ask for enough.

There’s a blueprint for Wiggins to be successful in San Francisco. If you squint, you can see a scrawnier Harrison Barnes, who was more of a posse member than a cornerstone but did contribute meaningfully to championship-caliber squads. This is both a modest and not altogether easily achievable goal for Wiggins, who’s been on a downward trajectory since he took that meeting with Glen Taylor. Perhaps a fresh start will help, but there aren’t many reasons to be optimistic. At some point, talent becomes an argument against a player. He has so much and yet accomplishes so little. We already know Andrew Wiggins isn’t going to make the most of his talent. The question now is whether he’s going to squander it completely.