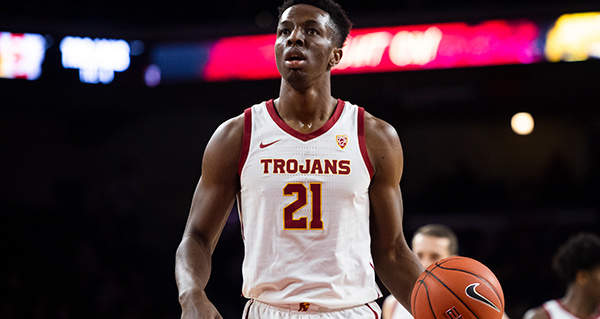 Onyeka Okongwu is another prospect considered to have risen in prominence compared to how he was viewed entering his first year of college basketball.

Though he was the 20th ranked player in the 2019 high school class [1], the six-foot-nine center was not widely projected as a potential one-and-done.

Okongwu stood out because of his impact around the rim on both ends. His combination of coordination and smoothness moving around the floor offers hope he could, soon enough, be about as good out in space as well.

But for now, though the potential to become a difference maker is evident, Okongwu's actually quite uneven in pick-and-roll defense, while his post-up scoring doesn’t seem to be up to the level required for getting those types of touches in the pros, so the 19-year-old [2] doesn’t project as a shot creator in the next level. His foul shooting percentage is strong for a pure big man, but his jump-shot is completely theoretical at this point of his development as well.

But even if Okongwu doesn’t develop into a particularly effective player away from the basket, he seems like a safe bet to make a living in the NBA for a while. In this day and age, an average big man is out there, even a stretch big, to help you defend better near the basket, otherwise it doesn’t make sense to play him instead of a smaller player who offers more dynamism on offense and switching ability across the perimeter on defense. And that’s what the Chino Hills native excels at.

Okongwu impressed with his activity stepping up to the front of the rim as the last line of defense, coming off the weakside in help defense, rotating in to pick up the roll man when he was not directly involved in the pick-and-roll and shadowing isolations to intervene when a teammate got beat.

He is a quick leaper off two feet and a fairly explosive leaper off one foot coming across the lane on longer rotations, capable of acting as a regular threat to block shots in volume or challenging them via verticality effectively.

Okongwu averaged 3.5 blocks per 40 minutes last season and ranked 20th in the NCAA in block percentage. As a star rim protector in college, he elevated the level of the defense around him – averaging 30.8 minutes per game for a team that ranked 25th in the country in opponents’ shooting percentage at the rim [3].

He also managed to make such an impact without putting himself in constant foul trouble, as he averaged just 3.5 personal fouls per 40 minutes.

Okongwu isn’t quite perfect just yet, though.

He hasn’t yet developed a feel for making preventive rotations that deny space towards the rim and discourages dribble drivers from attacking the basket altogether.

Okongwu is also prone to overhelping and chasing hopeless blocks on occasion, besides biting on shot fakes every now and again.

But more concerningly, either his agility or his proactivity in plays that required multiple efforts left something to desired, as he didn’t generally show the quickness needed to step up, cut off a drive and force a drop-off but then turn around and quickly contest his man in the dunker spot. Those types of second effort plays are what makes you an elite rim protector in the pros, where almost every driver can make a pass off engaging the help.

The Chino Hills High School product was asked to guard the pick-and-roll in different ways, but more often than not went a step or so beyond the foul line and dropped back to prioritize cutting off dribble penetration.

He is a little hit-and-miss in terms of bending his knees to get down in a stance approaching the ball handler but impressed with his smoothness and coordination sliding sideways and backpedaling in order to prevent the opponent from turning the corner or getting downhill right away off the pick.

Okongwu can keep pace with smaller players on a straight line from the foul line down and block a shot on the ball or discourage the attempt altogether. He’s shown to be pretty savvy leveraging his length into batting away lobs on occasion and getting his hands into pocket passes, with a few of his 34 steals in 28 appearances materializing in these plays.

But he can’t yet execute other strategies as effectively.

When he trapped or blitzed way out in the perimeter, Okongwu usually struggled to truly influence the ball handler well enough, though his footspeed recovering back to his man is pretty good.

He switched onto smaller players from time-to-time and seemed to prefer staying flat-footed while defending out on an island. Okongwu didn’t show particularly impressive side-to-side quickness to stay in front of shiftier types regularly and doesn’t leverage his strength into containing dribble penetration through contact. But he does manage to stay attached on a straight line pretty well against guards who only go north-and-south and also showed some hustle to recover and try to block a shot from behind when he got shook or beat on the first step.

There was no saving grace against the pick-and-pop, though, as Okongwu often struggled to balance stopping the ball and taking off to contest stretch big men effectively.

He’s shown only so-so diligence to his boxout responsibilities and not particularly impressive quickness reacting to the ball off the rim – collecting 18.5% of opponents’ misses when he was on the floor. His average of 7.0 defensive rebounds per 40 minutes ranks 21st among 36 big men on ESPN’s top 105.

Despite his chiseled 245-pound frame, Okongwu is also only so-so at holding his ground in the post. But he uses his length to deny easy post entries regularly and guards with his arms up to try walling up the rim when the ball does get entered.

Okongwu profiles as a rim runner in the pros but didn’t have a ton of opportunities to roll hard to the basket cleanly in college, due to USC's poor spacing, as only 54.1% of his makes at the rim were assisted [4].

It was fairly common to see him roll into a post-up or a face-up and he’s shown to be reasonably resourceful in these instances; able to spin into a floater off a jump-stop or work his way into a quick hook if he needs to deal with traffic, while impressing with his body control maneuvering his way through tight spaces and managing not to charge into the help regularly.

But the most noteworthy aspect of his approach when forced to cut his rolls short was the glimpses of appealing court vision he’s shown on quick kickouts on the move – assisting on 8.4% of USC's scores when he was on the floor last season, even if at a lousy 0.54 assist-to-turnover ratio.

His coordination also shined through in instances where he needed to catch the ball around the foul line, take a dribble to balance himself and gallop into a two-foot leap in traffic.

In the pros, Okongwu should be able to roll hard down the middle more often and figures to excel as a pick-and-roll finisher even more.

He is a decent screener who widens stance, looks to draw contact to dislodge the on-ball defender from the ball-handler and flashes decent feel for re-screening when needed.

Okongwu is an explosive leaper off two feet to play above the rim as a target for lobs sneaking behind the defense and has flashed the ability to go up strong without needing to load up, which suggests he might also be a threat to throw down lobs going up in a crowd in the middle of the lane.

He struggled some on non-dunk finishes when the lob was poorly tossed and he had to adjust his body in the air but generally showed soft touch around the basket when he got to go up and down – converting his 186 attempts at the rim at a 72.6% clip.

He doesn’t play with particularly impressive force looking to establish inside position in the offensive glass but his tenacity mixing it up on scrums to come up with second chance opportunities is noteworthy – collecting 12.5% of USC’s misses when he was on the floor. His average of 4.3 offensive rebounds per 40 minutes ranks 10th among the 36 big men on ESPN’s top 105.

Besides acting as a regular scoring threat on tip-ins and tip-dunks, his second jump is quick, and he can gather and go back up with power, even if surrounded – converting his 45 putback attempts at an 81.2% clip.

Okongwu is not very physical trying to establish deep position but managed to set a good enough seal more often than not in college.

He has a patient approach operating with his back to the basket and pretty light feet to work his way around the defender. Though he usually looks to back down his man to create separation for a basic right-handed hook, Okongwu mixes in some head fakes and pivot moves on occasion – creating 27 unassisted makes at the rim that were not putbacks in 28 appearances.

He seems to have a strong preference for going to his right hand but has gone to his left hand enough times to keep the defender honest, which makes his most elaborated pivot move faking left then turning right reasonably effective.

His touch seems to be beyond skepticism in these instances, as he converted a solid 41.5% of his 94 two-point shots away from the basket.

Okongwu has shown flashes of facing-up and launching long passes to the opposite court from time-to-time, and he can facilitate on handoffs a little bit, but nothing that suggests particularly special court vision as a shot creator for others.