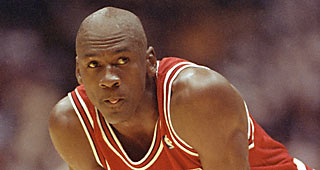 At the beginning of the sixth episode of ESPN’s new documentary series about Michael Jordan and his Chicago Bulls of the 1990s, the greatest basketball player of all time—and, in that moment, likely the most famous man in the world—can be seen inventing something to gamble over, with a security guard. In the bowels of the United Center, Jordan and this man, named John Michael Wozniak, who is much smaller than him and has a very distinct haircut, fashion an empty room into a little coin-throwing arena. Jordan loses twenty dollars in the ad hoc game, Wozniak’s hair bounces as he celebrates, and you get the sense, watching it unfold, that this kind of experience is a drug for Jordan not for any nefarious reason, but for a much less shocking or scandalous one: this is how he, on rare occasion, touches upon a privilege that the rest of us know at every moment—that of feeling normal.

Jordan, of course, is not and was not normal. He was too exceptional at what he did, and what did—what he truly, really, actually did—was play basketball better than anyone else. That he played the lead role in a monoculture that was expanding with freakish, alarming speed was more coincidental than anything. In David Halberstam’s arguably definitive book about Jordan and his era of the NBA, “Playing for Keeps”—which “The Last Dance” mimics almost entirely, on a structural level—an outsize share of this coincidence is attributed to the man’s smile. In his teeth and how he wielded them, in his blessedly handsome genetics and ability to appear utterly at peace with his excellence, through a smirk, Jordan gave an exploding media-commercial infrastructure the face they needed to tell a story more profitable than any before.

The industrial complex of dreams and aspirations built and sold on the foundation of Jordan’s seemingly easy superiority on the court is too vast to fully document, and counts as the grandest collection of projections upon one man in the history of sport. The amount of human desire woven into this single person exceeds what most presidents or international pop stars ever experience, and certainly what any of his NBA antecedents have seen—theirs is a world too hyper-mediated, too insanely diverse in its options for viewership and idolatry. When he retired prematurely and largely retreated from public life in 1993, it became clear that this was not a role Jordan actually wanted, but one he took on gradually and unintentionally, through a series of smaller, very gainful decisions (corporate sponsorships, mostly) that any rational person would have also made.

He did not fully know, until the 1992-93 season, that the collective consequence of these decisions was that of having his personhood robbed from him, and his humanity forcibly reduced into secret basement rooms of arenas, where he could collaborate with ex-military bodyguards like Wozniak on coin games that made him feel like a schlub again. None of this is to say that you should cry for Michael Jordan—he is a billionaire, after all, and did what he loved at a higher level than we can know—but to recognize that the cultural-commercial leviathan that he was thrown to the apex of demands a suffocating, post-human excellence in order to thrive.

Upon the public looking into the less glossy aspects of the real man, who was a historically large mark for golf hustlers and frequently an asshole to his co-workers, Jordan resolved that he needed a break from being the face of this leviathan. He barely ever really left the role, continuing as the most powerful character in commercials during his sabbatical, and returning to the floor well before anyone else could truly take the throne from him. In the decades since, though, Jordaniacs galore have dived gleefully into the cracks of his veneer, reveling in the hidden humanity of the man with the perfect smile and the unparalleled on-court artistry, presented to them for so long as not-real.

When Sam Smith’s “The Jordan Rules” hit bookshelves in 1992, sights of the real Jordan—prone to the petty and mean-spirited—were a source of schadenfreude, but over time the grosser, less ad-friendly aspects of who he is have been more rightly understood as imperfections worthy of reverie, not blemishes to airbrush away. Like all equivalent legends of sport before him (and there were a few; they just weren’t born into a media revolution) the man, at his best and his worst, flashes a creativity too fierce to seem real. If all you can do, upon learning that Jordan once referred to his team’s three under-coordinated centers as “21 feet of shit,” is wag your finger in judgement, perhaps your understanding of humanity is too narrow for this world.

In 2018, an image emerged, and it is probably the leading antidote to delusions of Jordan’s perfection, an antidote needed if you want to know how multitudinous and bizarre our species truly is. In the image, which is beautiful beyond imagination, Jordan appears as unglamorous as he ever been, but he is clearly incredibly pleased. In a New York City street, in the summer, Jordan, in his mid-fifties and chunkier than we remember him, carries a case of tequila as he wears his own brand, a logo of himself in the air just below his chin. He continues his pace unfazed as people around him present materials for autographs, his eyes red as hell as they bore into the camera that, this time, brings him to us. He is no longer worried about seeming a certain way for it. He walks upon this earth messed up and flawed like the rest of us, however unprecedented his achievements may be. He is, in broad daylight, in his country’s most populous city, very much in the public, now himself as much as he was, twenty years ago, tossing coins in a secret arena basement room. He has never looked more real.