The Rockets Are Testing The Limits Of Small Ball 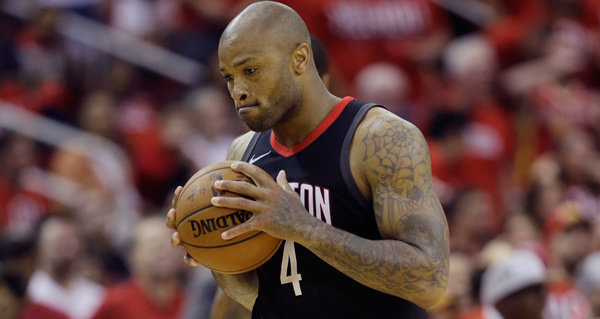 Over the five-year period of 2015 to 2019, the Golden State Warriors made the NBA Finals five times. They won the title three of those years, but won a bigger battle of ideas, and kept winning it, almost from the moment they struck upon their number one weapon against any adversary: their famous Death Lineup. Featuring Steph Curry, Klay Thompson, Draymond Green, Andre Iguodala, and Harrison Barnes (later replaced by, get this, Kevin Durant), this five-man front has indefinitely warped the way NBA teams build their rosters and approach the game. Much smaller in the frontcourt than your traditional championship-level closing lineup—though actually coming out relatively close to standard, size-wise, if you average body types out—their historically effective scoring margins presented the sport with what seemed like a cavernous market inefficiency never previously exploited.

With the Warriors in the midst of what’s ostensibly a gap year in their dynasty, this cave is still being actively explored. More than ever, NBA teams are eschewing old baked-in notions of how big your front court needs to be—so much so, in some cases, that actually designating any of your rotation players as proper frontcourt men becomes a strange and difficult task. The closest thing the Houston Rockets’ main lineups have to a center, for instance, is the 6-foot-5-inch P.J. Tucker; the closest thing they have to a power forward is the 6-foot-7-inch Robert Covington. This particular team’s commitment to novelty—and their resulting, demonstrated weaknesses—give us the most extreme example of how the league is trending, and as such tells the story of a movement toward a new gimmick-driven paradigm, inspired by a misinterpretation of what made those Warriors so great. It’s a rising style, and one that’s more than ripe for a new counter-exploitation.

In the Rockets’ recent 110-102 loss to the Portland Trail Blazers, this form of exploitation was on rich display. In a close game that wasn’t really over until its final minute, one box score discrepancy glares more brightly than the rest: the Blazers’ 64-to-39 edge in the rebounding column. It should not be surprising, given this figure, that the Blazers attempted eight extra shots, and five extra free throws, despite turning the ball over two extra times. Seven-footer Jusuf Nurkic walked his way to 19 rebounds, surely benefitting along the way from the presence of 6-foot-11 teammate Zach Collins near the rim. In a game of inches, rolling these two guys out against the experimentally undersized Rockets gives you a foot-long advantage.

There are three central qualities key to the readily disproven ideal of playing smaller and smaller lineups: a speed advantage, enhanced three-point shooting, and defensive switchability. While maximizing these qualities to the utmost can certainly create frankly unsolvable problems for any opponent, it is the norm that teams going smaller are chasing these qualities rather than attaining them, and tearing massive strategic holes in themselves along the way. For some reason, it is rarely noted that despite being remembered for their lethal bursts of small ball, the Warriors five-year romp included lots of Andrew Bogut and Zaza Pachulia, to name just two of their cadre of classically fashioned big men. Had they tried to play their Death Lineup—only functional, for the most part, because of the nearly unparalleled defensive versatility of Green—for the majority of games, their players would have gotten too tired to breathe after banging around with men so much larger than them.

It seems that fleeting instances of big men stumbling all over the place, trying to catch up with free-shooting perimeter players in a high-motion offense, have made too large an imprint on the NBA’s brain, and that undersized lineups being stonewalled from the glass and winded from too many brush-ups with people 100 pounds heavier than them have not made a big enough one. In reality, size matters. So, too, do creativity and intelligence: the actual motors of the Warriors’ Death Lineup excellence. Exercising a replacement-level amount of either pulls you to the conclusion that small ball is a hack for only the most select of moments, and exclusively with personnel that can only be described as Chef’s Kiss. Without hitting those notes just right, small ball overdrive is a course bound for a brick wall built since before the sport was on television. While it may seem so old that it could crumble, there is an easily seen pile of casualties at its foundation who thought the same.