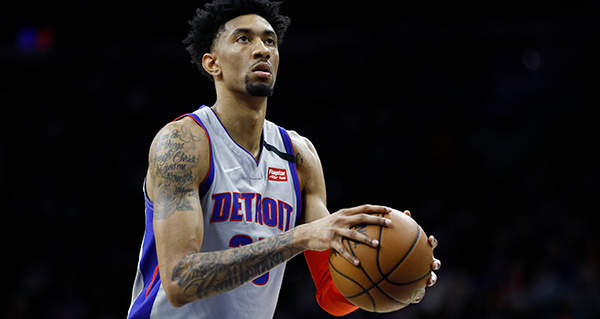 Analysis: Troy Weaver starts his tenure as Detroit Pistons General Manager with about as blank a canvas as is possible in the NBA. Blake Griffin has two years and $75.7 million coming his way, and Tony Snell will likely pick up his $12 million player option for 2020-21, but those are the only two double-figure salaries on the books. With only a handful of other players under contract, Weaver has a lot of holes to fill and about $34 million in cap space to do it with.

A chunk of that cap space is likely reserved for breakout big man Christian Wood. After the New Orleans Pelicans filled out their roster in the offseason, Wood was waived for the second time on the same contract. Detroit claimed Wood as a flyer, but instead found themselves a starting big in his mid-20s.

In his first rotation role, Wood averaged 13.1 points per game on 56.7% shooting. Included in that is 38.6% on 2.3 three-point attempts per game. At 6’10’’, Wood has the sort of inside-outside scoring game that teams prize in a modern big. Look at the per-36 minutes numbers between Wood and similarly-aged Kristaps Porzingis and you’ll see a surprisingly similar offensive picture.

Detroit has Early Bird rights on Wood, which means they are maxed out offering the big man a four-year deal starting at just over $10 million using those rights. Or the Pistons can dip into their cap space to offer him a deal that starts anywhere up to his max salary of $27+ million. The guess is that both sides will settle somewhere in between that at around a $14-15 million starting salary. That takes some of Weaver’s cap space off the table, but in a weak free agent class, it’s worth it.

The other free agent the Pistons may look to retain is Jordan McRae. Detroit claimed McRae off waivers and now has full Bird rights on him this summer. His minimum salary cap hold allows the Pistons to basically do whatever work they need to do and then they can re-sign McRae for any salary they want. McRae can score and could provide some extra depth on the wing on what should be a fairly team-friendly contract.

After taking care of Wood, and maybe McRae, the rest of the Pistons roster starts to fall into place. The hope is that Blake Griffin can return to form after another knee surgery. Even if Griffin isn’t at the All-NBA level he played at in 2018-19, he should be a useful, if overpaid, player for the rest of his contract.

Beyond Griffin, the Pistons have Derrick Rose back after a terrific year as the team’s sixth man. Rose has one year and $7.7 million left on his contract. Given the need around the NBA for backup point guards that can run an offense and score, at the very least Detroit has a nice trade chip.

Griffin, Rose and the likely to opt-in Snell make up the entirety of the veterans on the Pistons roster. The rest of the roster is currently made up of players that are 24 years old or younger. Of that group, Luke Kennard and Bruce Brown look the most like NBA players right now. Kennard had his best season with 15.8 points per game on 44/40/89 shooting splits. Unfortunately, Kennard went down for the season in late-December with knee soreness. He’s extension-eligible for the first time, but Detroit will likely let that carry into his restricted free agency in 2021 due to his inability to stay healthy.

Brown has been a starter for most of his first two seasons and improved greatly in his sophomore season. He showed he can do some things off the dribble as a scorer and playmaker, as he averaged 8.9 points and four assists per game. Brown also continues to be a willing defender and good rebounder, with 4.7 boards a night. The most encouraging part of his game was that he upped his shooting to 44% overall and 34% from behind the arc. Brown looks like a rotation player on the low-end and solid starter on the high-end.

Svi Mykhailiuk should see his team option picked up. He can’t do much beyond shoot the ball, but he does that so well that Mykhailiuk will have an NBA job for years. On a team with few consistent floor-spacers, Detroit needs to keep Mykhailiuk around.

Sekou Doumbouya, last year’s first-round pick, showed some flashes as a rookie. He predictably struggled defensively and fouling a lot. As the NBA’s youngest player (he doesn’t turn 20 until later-December), Doumbouya is still learning how to play. He’s worth the development time though, as the athleticism and skills are there.

Development time is something the Pistons should have plenty of to offer. This offseason doesn’t have any quick fixes for Weaver to get the team back into playoff contention. Re-signing Wood should be priority one. Rehabbing Griffin to the point where a team may trade for him, is priority two. After that, its about developing the young players on the roster already.

At the 2020 NBA Draft, Detroit has the luxury to take the best player available. No one currently on the roster, even a re-signed Wood, should be considered locked in long-term. The Pistons have holes at every position and in every role. Whoever they add at the draft should be able to play immediately.

Unless Weaver can take a Nets-like approach and pick up undervalued castoffs on team-friendly contracts, the Pistons shouldn’t be offering any long-term contracts this fall. If the salary cap drops, or even stays flat, some teams will be facing unplanned luxury tax concerns. If the Pistons can eat a contract or two in exchange for draft picks, that’s an approach Weaver should take.

Because they’ll likely have to use some cap space to retain Wood, it’s unlikely Detroit can get involved with making a team sweat a max offer sheet for a restricted free agent. But they could put pressure on with some players the next tier down. Bogdan Bogdanovic, Kris Dunn, Malik Beasley and De’Anthony Melton could all be targets. All of those players would help the Pistons now, while also being young enough to fit with the younger players on the roster.

Beyond retaining Wood, and maybe chasing a restricted free agent, it’s going to be the kind of offseason that leaves Pistons fans feeling underwhelmed name-wise. But chasing big names hasn’t really worked out for Detroit in the past when they’ve had cap space. Troy Weaver was schooled at Oklahoma City that you build through the draft and by developing your own players. When you’re ready, you make smart trades using the assets you’ve built up. It may not be flashy and exciting, but look for that to be the path Weaver puts the Pistons on.